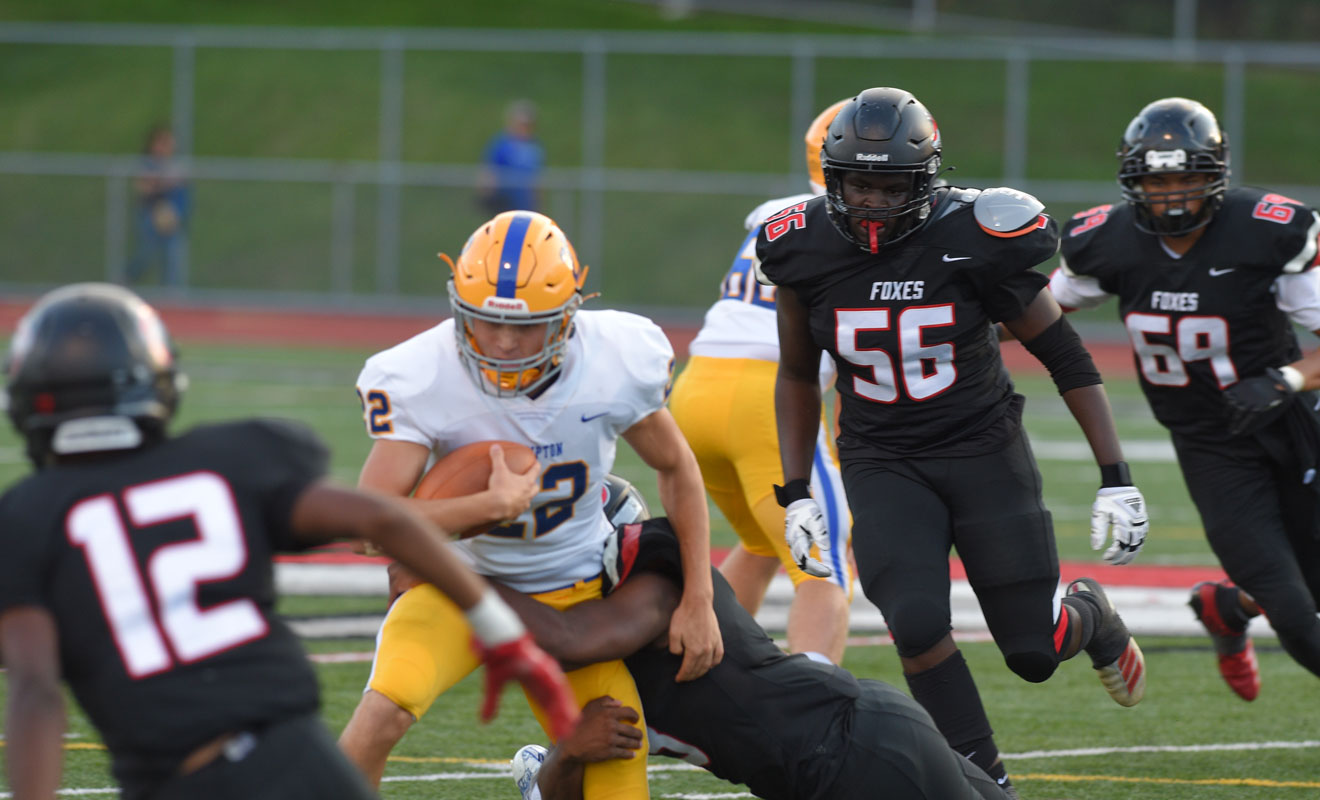 With the score tied and just over 6 minutes remaining, the Fox Chapel defense knew it need just needed to make a key stop as Kiski Area worked to get out of the shadow of its goal post.

The Foxes (4-3, 2-0) forced Kiski Area (5-2, 0-2) to punt and took over at the Cavaliers 38-yard line. Fox Chapel pounced on the short field and scored the eventual winning touchdown on the road to a 35-21 win Friday night in Class 5A Northeast action at Richard Dilts Stadium.

“This win makes the next game important. We know we have two conference wins now. We are happy to move on. The only reason why the next game is important is because we took care of this game,” Fox Chapel coach Tom Loughran said.

Three plays later after gaining possession, Fox Chapel senior quarterback Collin Dietz threaded a ball between Cavalier defenders as he connected with senior Khi’lee Patterson down the middle for a 22-yard touchdown pass to score the winning touchdown.

On the ensuing drive with the Cavaliers’ hopes to win on life-support, senior Zidane Thomas picked off Kiski Area’s senior quarterback Logan Johnson on fourth down.

Thomas, who finished with 12 tackles on the night, zig-zagged for a 54-yard touchdown to seal the victory for the Foxes.

“Zidane played an excellent game both offensively and defensively. I thought he ran the ball well, but we didn’t block that well for him. When they started to overcommit for the pass, we knew we needed to run the ball some. We did a little bit but we still want to do a better job of that,” Loughran said.

The Foxes, who allowed 327 yards of total offense, made the necessary stops down the stretch and scored 21 unanswered points to end the game.

Dietz went 10 of 15 for 218 yards passing, four total touchdowns and threw one interception. He started the scoring off with a 40-yard throw down the right sideline to senior Colin Kwiatkowski with 5:04 remaining in the first quarter

After back-to-back Kiski Area touchdowns, Dietz connected with Patterson, who finished with 136 yards receiving, on a 65-yard pass to tie the score 14-14 with just over a minute in the first half.

The Cavaliers methodically drove down the field as Johnson showed off his dual-threat capabilities. Johnson capped a nine-play, 76-yard drive that took over five minutes when he threw a back shoulder throw to senior Calvin Heinle for a 16-yard touchdown pass to give Kiski Area a 21-14 lead in the third quarter.

Johnson finished 7 of 8 with 107 yards passing, threw two touchdowns and two interceptions in the loss. Johnson also rushed for 107 yards for the Cavaliers.

“I’m always proud when my athlete play hard. I think we needed to make a play or two and we didn’t. My hats off to them for making some big plays,” Kiski Area coach Sam Albert said.

“I told the kids to keep their heads up. We have three games left. We have to first-class in victory and defeat.”

Dietz took the shotgun snap and rushed it in from 10 yards to tie the score and to start the 21 unanswered points scored in the fourth quarter by the Foxes.

The Foxes finished with 284 yards of total offense.