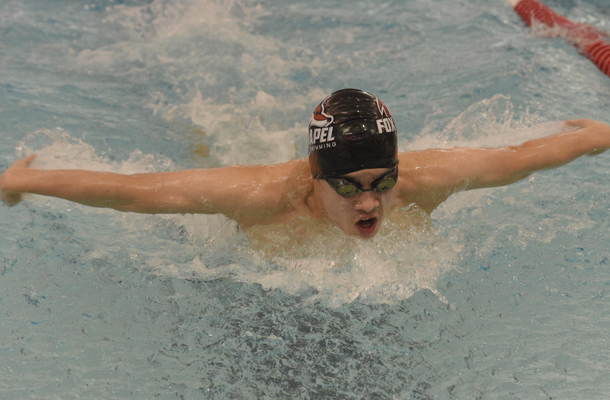 The last time a Fox Chapel boys swimming and diving team won a section championship, the current team members were more than a decade away from being born.

“Every single day going to practice, there’s a different feeling,” said Roe, a sprint freestyler who also competes in the 100 back.

“We have an opportunity to do something special. Starting my freshman year, we wanted to cultivate talent, and that’s happened with each class. We built dept from the ground up to this point. The prospect of winning the section title is pretty special.”

The Fox Chapel boys are 7-1 overall and 4-0 in Section 3-AAA. The Foxes have a nonsection meet against Baldwin at 4 p.m. Friday before a matchup at rival Franklin Regional next Wednesday.

The Panthers, also undefeated in the section, swim against section foe Gateway at 6 p.m. Friday.

“We’re really looking forward to the Franklin Regional meet,” Roe said. “We have a good chance to upset them if we swim our best.”

Roe said depth has helped put the team in position to bring home some hardware.

He also noted that fostering the notion of equality where every swimmer is looked upon as valuable has boosted morale and strong swims.

Roe and juniors Will Wang, Nate Serkov and Jake Sperry have posted WPIAL qualifying marks, and more are expected over the final couple of events before the WPIAL championships the week of Feb. 25.

“We have a lot of boys on the team, juniors especially, who have worked really hard and have taken their swimming to a different level. It’s their time,” Fox Chapel coach Dan Taylor said. “They’ve embraced the moment and are swimming fast.”

The section meet with Plum came down to the wire before the Foxes pulled out an 87-83 victory.

“There was no diving at that meet, and we have some very accomplished divers,” Taylor said. “We couldn’t take advantage of them scoring points for us. I swam a lineup that was different from what we will swim at Franklin Regional, but the Plum boys swam really fast that night. It forced our boys to step up. It was a tight meet from the start, but it was a lot of fun.”

The Fox Chapel girls, also 7-1 overall and 4-0 in the section, have tasted section success more recently with a championship two years ago, but the team, including senior Margaret Fox, juniors Grace Gackenbach and Leia Ross, sophomore Vivian Shao and freshman Zoe Skirboll, hopes to bring the title back in 2019.

Skirboll, Gackenbach, Shao and Ross have posted qualifying times to WPIALs with more expected in the coming days and weeks.

“We graduated some really talented girls last year, and others didn’t return to the team after contributing the past couple of years,” Taylor said. “We had several holes to fill. Zoe, no doubt, has made an impact, and other freshmen like Rei Sperry and Julia Stutzman have contributed.”

Skirboll’s success in club swimming has been well documented over the past several years, but one of the top freshmen in the country is showing her talent on the high school level with times among the WPIAL leaders in almost every individual event.

“It’s been a lot of fun, and I am excited to see what I can do at WPIALs and hopefully states,” said Skirboll, who finished fourth in the 100 breaststroke at the Speedo Winter Junior Nationals East on Dec. 7 in Greensboro, N.C.

“Olivia is such a great competitor, and it was exciting going against her in a dual meet,” Skirboll said. “We might get to race again at WPIALs.”

“It was pretty exciting to see two of the fastest girls in the state go head to head in a dual meet,” Taylor said. “There was a lot of energy for those races.”

Skirboll has qualified for WPIALs in every individual event except for the 100 backstroke.

“Regardless of what we decide to do for the WPIAL meet, she will be swimming to win that race,” Taylor said. “She is just so versatile.”