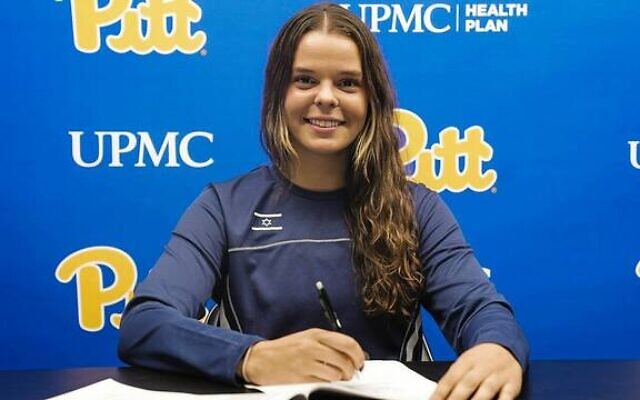 “When I got there, it was her class that was the heart of our team,” said Sinnott, who graduated from high school in 2019 and is two years younger than Veltri. “She was always one of the hardest workers on the team — you could see she loved the game. And you could tell she was going places.”

Veltri is now headed to Israel.

The former University of Pittsburgh mid-fielder has signed a two-year pro soccer contract with Maccabi Emek Hefer WFC of the Israel Women’s Premier League. Veltri joins past teammates Juliana Vazquez and Amaia Pena as the third player to go pro since Pitt head coach Randy Waldrum took over the program in 2018.

Veltri, who is not religious but was born to a Jewish mother and Christian father, told the Chronicle that the Israel Women’s Premier League “is definitely a great starting place for playing in Europe — but it’s also very competitive.

“The Israeli teams have done well but I think they’re going to do even better,” she added.

The Fox Chapel High School alum was a three-year letter winner in the previous three seasons for the Pitt Panthers after transferring from UNC-Wilmington, where she spent her freshman year. During her last two years at Pitt, she served as a leader for squads that have seen a strong rebuild under Waldrum, and was selected a team captain in 2020.

“That work ethic — she was something the team desperately needed and she was one of the first players that set a new standard for the team,” Waldrum told the Chronicle.

Waldrum said many young female players are going to countries like Israel, Iceland, and Finland to start their pro careers.

“This is a pathway a lot of young players take,” he said. “She’ll always be able to say she did it [and went pro]. I think she’s realizing that dream. We’re really proud of her, and as a program we’re very happy for her.”

Veltri plans to start playing for Emek Hefer later this month — she’s leaving Dec. 20 — after she earns her master’s degree in sustainable engineering from Pitt. She earned a bachelor’s degree in finance there with a minor in economics and a certificate in sustainability. She was named three times to the ACC Honor Roll, which is comprised of student-athletes with a grade point average of 3.0 or above for the full academic year.

Veltri said she is considering applying for aliyah and becoming an Israeli citizen, which would make travel in and out of the country easier — and would also make her eligible for the Israeli national team. She has family friends in Israel, which she said should make the move smoother, but speaks no Hebrew.

The young player will be moving to Netanya, on the Mediterranean coast in central Israel, and will be rooming with four other pro soccer players from the U.S., Israel, Africa and Canada.

“It’s girls from all over the world — it’s exciting,” she said.

Veltri also feels she is taking the next step in a life journey, something she’s been playing out in her mind for years.

“I always wanted to play Division I,” she told the Chronicle, “and I always had dreams of playing professional soccer.”