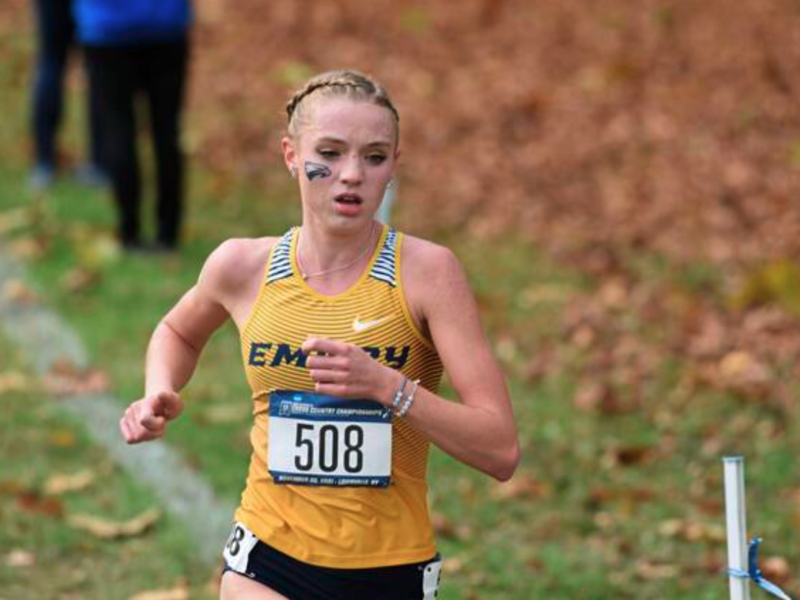 A week earlier, the Emory University sophomore placed first at the South Regional Championships, was named the South/Southeast Regional Female Athlete of the Year and was named to the All-American team based on that performance.
There were 293 runners in the Louisville race.
“It’s been an incredible experience, ” Urban said of the national meet. “It was a large race and very exciting. There’s a lot of athletes and supporters there. It’s just an insane atmosphere.”
Urban finished with a time of 21 minutes, 15.5 seconds, a shade behind 11th-place finisher Anastasia Tucker of Hope University.
“I had passed her in the first 400 meters, then in the next 200 meters she passed me, ” the 2019 Fox Chapel graduate said.
Urban had familiarity with the Louisville course.
“I had raced it a couple of times, ” she said. “I finished 266th two years ago. It is relatively flat, but it has some awesome curves and there’s lots of room for spectators.”
At the South Regionals, Urban took the individual title at 21:43.1. Earlier this season, Urban placed first in the Emory-Oglethorpe Duel with a time of 21:30.0 and took runner-up honors at both the University Athletic Association (UAA) championships at 22:35.0 and at the Live in the Lou Cross Country Classic in 21:49.1.
She was named back-to-back UAA Athlete of the Week for her performance in the regionals and nationals. Urban outpaced all other UAA athletes at the national meet.
“Annika has just capped off one of the best seasons in Emory cross country history, ” said her coach, Linh Nguyen. “She’s been incredibly consistent and has put herself at the front of every race we’ve been in. I think she saved the best for last, with the All-America finish at nationals.”
As is the case with many athletes, Urban has a pre-competition routine. She bakes from her mother’s special walnut chicken recipe and watches film imagining herself racing to get into the proper mindset.
Urban will take a week or so off before preparing for the indoor season with a met Dec. 3 in Birmingham.
“I’ll rest after that, though I’m feeling good right now, ” Urban said. “Then, I’ll start building for the spring track season.”
“I really can’t say enough about her as a person and a student-athlete, ” Nguyen said. “She’s dedicated to the student-athlete lifestyle and committed to seeing how good she can be at running. She makes good life choices and models everything a coach wants in a leader.”
The Emory team, as a whole, finished 19th in the country at the national meet.
Urban hopes to do some training with her brother, Theo, a former Fox Chapel student now with Moravian Academy in Bethlehem. Annika’s family recently moved to the Lehigh Valley.
While at Fox Chapel, Urban helped lead the Foxes to the 2017 PIAA team title and earned 11 varsity letters in cross country and indoor and outdoor track.
One obstacle the Emory Eagles have is that there is no home course on the campus in mid-town Atlanta and uses nearby courses for their home meets.
Urban is majoring in human health and hopes to take on a second major in political science.
“I visited Emory in high school during the winter months, ” Urban said. “There was no snow or ice there, and I spent a night with the team and felt like the place was just right.”
Urban was a promising swimmer in middle school and gave up the sport to concentrate on running events.
– George Guido | Trib HSSN
0Shares
PrevNext