For the ninth time in 10 years, the Foxes girls’ tennis team won the WPIAL Class AAA Section 3 championship. In all, since 1971 when the program started, they have earned 24 section gold medals. In the 2019 regular season, the team finished the year 9-0 in the section and 14-1 overall.

Now, going into the postseason, the team will enter the playoffs with both depth and talent, even though the roster contains a lot of young, rising players.

All year, senior Charlotte James has led the way and provided excellent leadership for the young team. Her experience and maturity on the courts just resulted in her winning the WPIAL AAAA singles championship. It was the first time in school history that a female tennis player won that award.

Sophomore Carissa Shepard and freshman Catherine Petrovich have also had great seasons and shown fierceness as part of the singles lineup. They also paired up at the end of the season for the WPIAL doubles championship and advanced to the consolation finals. In August, the two played up and won the 18s division at the USTA Juniors tournament at the Fox Chapel Racquet Club. 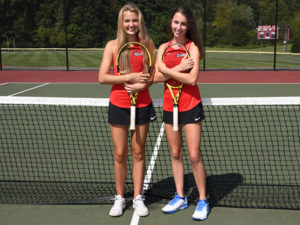