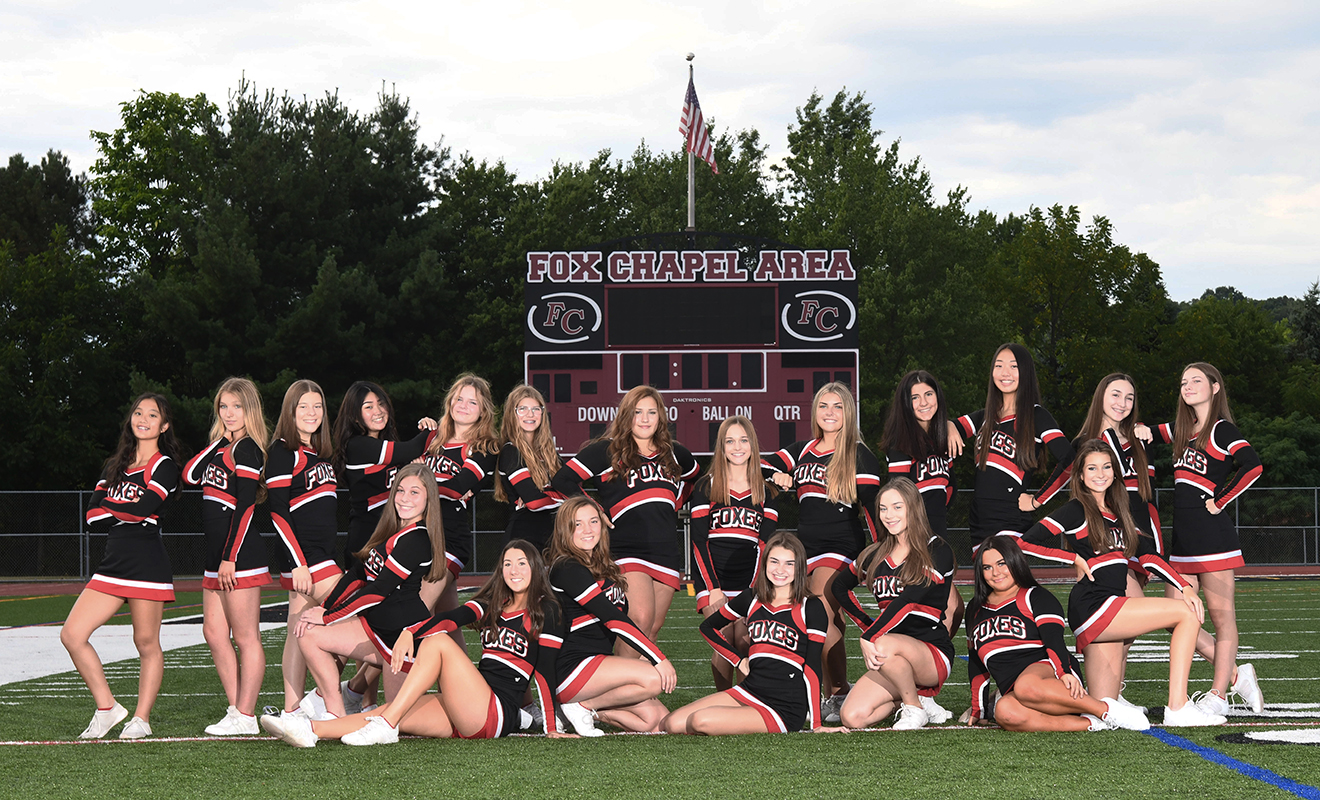 “Friday Night Lights” look a lot different this season, but the enthusiastic support of the football team from the Foxes cheerleaders has not been dimmed. While one wouldn’t blame the squad if there were fewer sparkling smiles, Coach Aleta Balcer says that’s not the case at all.

“If they are feeling any different, you would not notice,” says the coach. “The girls are definitely sad there are not a lot of fans or a student section this year, but we are so happy to be on the sidelines cheering for the boys.”

This is Caitlyn Novak’s first year on the squad after being a member of the middle school team. While she knew there would be a lot more chants, dancing, stunts, and competitions, this was not exactly the start the freshman had always dreamed about.

A former gymnast, Caitlyn picked up flying skills (lifts) very quickly, and says, “The other girls on the team really help to get up our enthusiasm. We get each other excited and ready to cheer before a game and during it. You just have to make the best of what we can do right now, and even with not many fans, the ones who are there still try to cheer with us.” 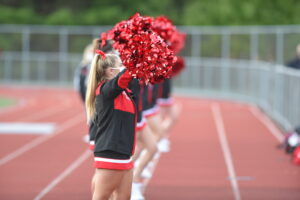 Senior captain Kenzi Kavalir says, “Our squad this year is determined, hard-working, and positive. We know that we will not have the season that we expected, but that is not stopping us from making the best of what we have.”

Pittsburgh Steelers coach Mike Tomlin has a well-known adage that says, “The Standard is the Standard.” Usually people associate that with football or other sports, but the concept also holds true for what Coach Balcer expects of her student-athletes, even though there have been many challenges that could have altered that from happening.

“We were not able to practice over the summer,” says Coach Balcer. “We were not even able to hold tryouts until August. They are normally done in May. We had to work twice as hard in a very short amount of time just to learn the cheers in time for the season. We are finally in a place where the girls are comfortable with the cheers so we can start to learn our dance and stunting routines.”

Coach Balcer continues, “Our goals have not changed. We continue to focus on game days and cheer competitions, although we are not sure yet if or how competitions will be held.”

Kenzi says stunting is one of the overall team’s strengths, as well as one of her own after many years of experience.

“It’s only the beginning of the season and almost all of our stunt groups are consistently hitting straight-up extensions without a front-spotter, which is a big achievement for our team,” says Kenzi, whose leadership is reinforced by senior co-captains Cora Herceg and Claire Gallagher. “At every practice, we work on perfecting and learning new stunts for our games and for competitions.”

For Caitlyn, there is still much more for her to learn.

“As a freshman, of course there are some cheers that are the same from the middle school, but with basketball season included, there are well over 100 cheers to memorize,” Caitlyn says.

Some of those routines are rooted in tradition, such as the “Foxes Rumble,” which usually is performed in front of the student cheering section and is always a crowd pleaser.

For those who might be unaware of what the rumble represents or what it is, Kenzi explains. “The rumble is an interactive cheer that we perform with the crowd and the band to get the crowd involved. It’s a school tradition to encourage our sports teams. Now that there aren’t many fans at the games, we still wanted to do it to carry on the tradition and, at the first home game, we were able to get the senior parents to do the cheer with us!”

Another tradition the coach would like to continue is the team’s charitable work.

“Over the years, we have collected toys at each holiday,” she says. “The last two years, we have donated toys to The Children’s Home of Pittsburgh & Lemieux Family Center. Prior to that, we donated to a local church and to Children’s Hospital. We are hoping to be able to do it again this year but would like to do something to help the families in the district. There are so many families in need within our own district, and it would be great to keep it local.”

Until then, the entire squad will be staying the course and hoping to be able to fulfill their plans for the rest of the year. In addition to Kenzi, Caitlyn, Claire, and Cora, members of the 2020-2021 squad are seniors Alexis Austin, Elena Perez, and Cara Waxter. Juniors are Elle Coleman, Chloe Rongier, and Lucy Valkanas. Sophomores include Kathryn Billings, Nurie Kim, Anna Li, Sloane Simon, and Isabella Stipetich. Evelyn Healy, Gabby Hodas, Christina Panza, Anneliese Pham, Mia Pietropaolo, and Sophie River represent the freshman class. 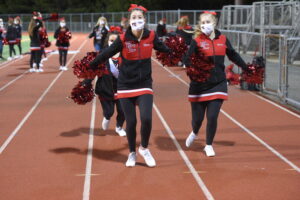