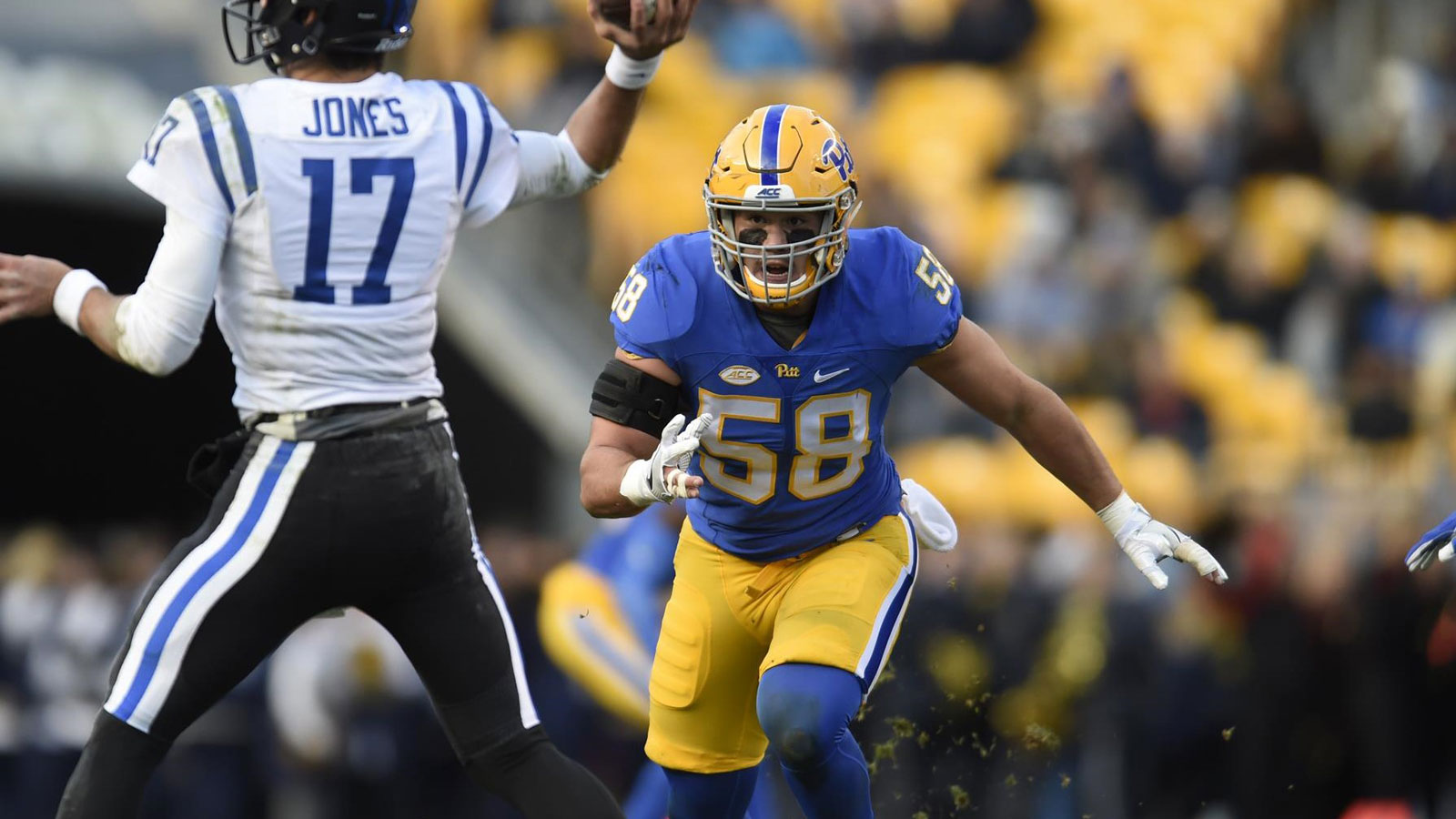 Now that college football’s postseason has been set and the NFL playoffs near, former Pitt middle linebacker Quintin Wirginis finds himself in some sort of no man’s land. Between a rock and a hard place, the rock being a collegiate tenure without a proper ending, the hard place being a pro career without a proper beginning.

But Wirginis isn’t giving up.

The date is easy for Wirginis to remember. It’s the day last year that he had surgery to repair the torn ACL in his right knee. At the time, he was leading the Panthers in sacks, tackles for loss and total tackles, having a breakout redshirt senior season as a team captain, one year after missing the 2017 campaign because of another injury.

But Wirginis got hurt in practice after Pitt’s sixth game, the exact midpoint of the regular season. It was too late to possibly apply for a medical redshirt and sixth year of eligibility but far too early for Wirginis to feel as if he went out on his terms.

“I think I do a pretty good job at not looking at what’s happened and saying ‘what if,’ you know?” Wirginis said. “I’ve been given these cards, and I’m going to make the best of it. I mean, I’m a firm believer and I’ve always said that everything happens for a reason. Even with my fair share of bad luck or whatever you want to call it, I still think everything happens for a reason.”

Since then, Wirginis wrapped up his communications degree at Pitt and served as a volunteer coach this football season at his high school alma mater, Fox Chapel. He splits time between his parents’ home in Indiana Township and his girlfriend’s house in Oakland, driving for Uber when his schedule allows, all in the name of staying busy.

But most of all, Wirginis is working. You can regularly find him at the Duratz Athletic Complex on the South Side, lifting weights in the Aaron Donald Performance Center or going through conditioning on the same field where he practiced in college, with the same guidance, Pitt strength and conditioning coach Dave Andrews. When Wirginis works out in the indoor facility at UPMC Rooney Sports Complex, he does so in the solitude of an empty field. When he takes his sessions outdoors, he’s often pushing a sled or running sprints right next to where the Steelers are practicing, 60-some professionals representing the goal he continues to chase.

“What was hard was whenever the football season began,” Wirginis said. “Even seeing the college season start, the NFL season starting, just the hype, that excitement that I’ve been a part of for as long as I can remember, and then this year, I was kind of on the outside of it.”

Wirginis’ recovery from his knee injury kept him from participating in Pitt’s pro day last March, and after he went undrafted, he also wasn’t ready in time for NFL rookie minicamps in the spring. In late July, training camps kicked off around the league, and he still wasn’t at a point where he felt fully healthy.

Now, the 6-foot-2, 240-pound Wirginis believes he’s better than whatever 100% used to be for him. And the NFL might be noticing. The Philadelphia Eagles had Wirginis in for a group workout with five other free agents Dec. 2, his first real chance since the injury. He isn’t expecting a team to sign him or add him to a practice squad this late in the season but hopes he’s getting his name out there for 2020, with a message: I’m ready for whatever.

“I love special teams. I think I’m definitely one of those guys” at the NFL level, said Wirginis, who played with reckless abandon in Pat Narduzzi’s base defense, let alone on kick and punt coverage. “And we’ve had tons of guys come through Pitt that are like that, that just love special teams. Even kickoff return, punt return, I live for that.”

Wirginis credits his agent, former Pitt defensive lineman Gus Mustakas, for keeping an open line of communication with pro teams and explaining why his client has been careful about his rehab. He’s also grateful for Andrews, who “treats me like one of his [current] players,” as well as Pitt assistant strength coaches Freddie Walker and Austin Addington-Strapp.

Plenty of out-of-work college standouts were part of the player pool for the startup draft of the new XFL, which will be revived with its season opener the first weekend following the 2020 Super Bowl, but Wirginis was not. He’s open to it, as well as the CFL, but before he heads north of the border or takes his chances in a minor league, he wants to see if he can hit the offseason circuit he missed out on last summer.

“The big dream is to play in the NFL, and you’d like to exhaust all opportunities before you move elsewhere,” Wirginis said. “But 100%, I would love to make money playing football — in any setting, it doesn’t matter where, but I’d like it to be as soon as I can.”