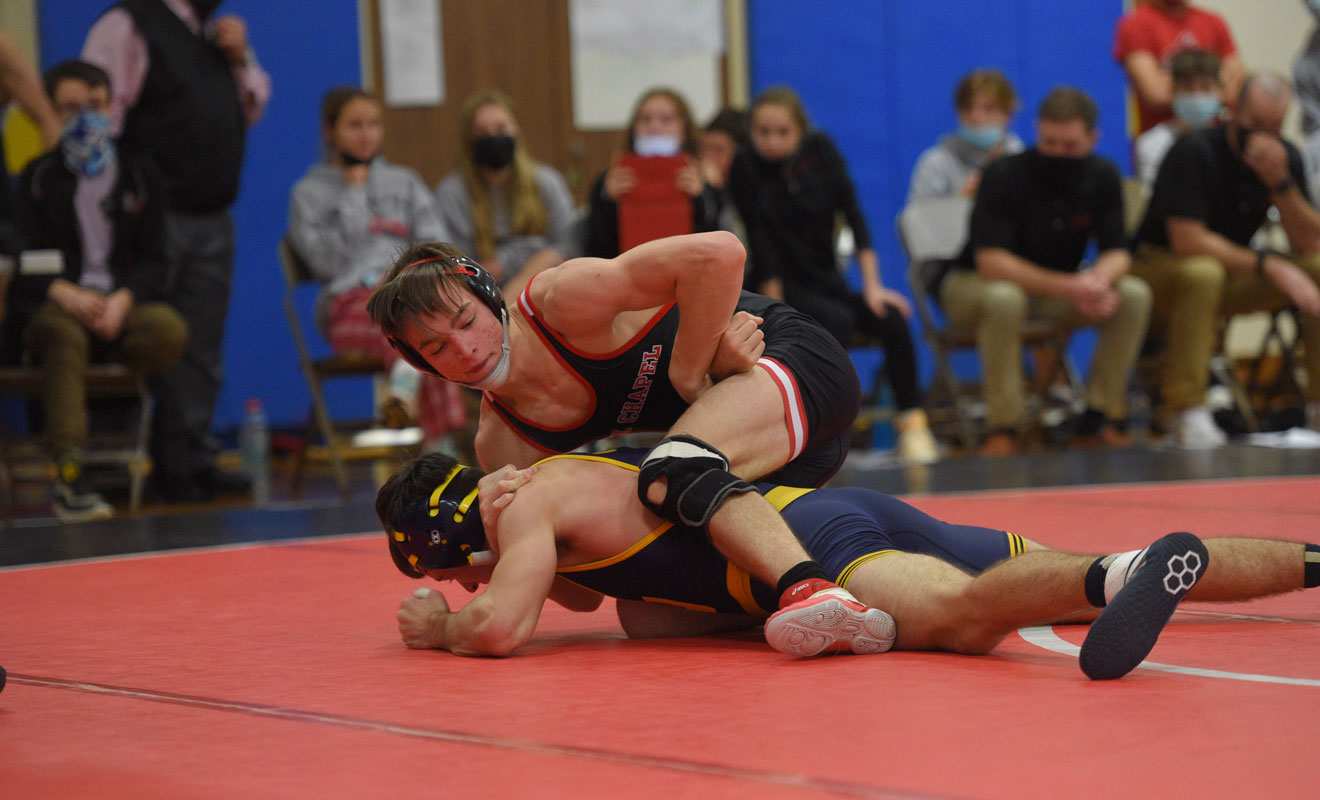 Fielding one of its youngest teams in memory, the challenge for Fox Chapel wrestling is to quickly get the newcomers into varsity competitiveness.

It doesn’t help that injuries and covid concerns have hampered the Foxes start this season.

“We have a couple of injuries early on in the year that we’re still trying to overcome,” said Fox Chapel coach Michael Frank. “I think we should be able to fill an entire lineup. We’ll see how it goes. But we have a young team, a heavy sophomore and freshman class.”

Fox Chapel opened the new season in the Dog Duals at Hampton High School. As opposed to an individual tournament, duals give all wrestlers a maximum number of bouts. Each wrestler had five matches.

“We lost a pretty good amount of starters who graduated and a couple more who didn’t come out for wrestling,” Frank said. “Looking at it overall, there are five weight classes where we have new people starting this year.”

A key returnee includes Ray Worsen at 138 pounds, a four-year starter whose leadership capabilities will be paramount.

“Brendan Kost and me, the two senior captains are leading the freshmen around,” Worsen said. “We’ve got 16 freshmen, so we’re definitely starting off on a different foot than normal, but I think we’ll be able to excel by the end of the season.”

Trevor Katz has had injury-plagued career but is getting healthier, though he wasn’t able to compete at Hampton. Alex Kauffman, a sophomore, and Josh Alexander were starters most of last year.

“We have some freshmen that are right at the doorstep competing against others. It’s a good, healthy competition in our room right now,” the third-year head coach said.

“We’re trying to improve in the neutral position, bottom position mainly. The younger wrestlers are trying to get the fundamentals down, and I’m trying to get better. I’m lifting every day this week,” said Ray Worsen, who looking to continue his career at either Pitt-Bradford or Pitt-Johnstown.

One of the highlights of the season is the annual Allegheny County Tournament, hosted by Fox Chapel on Jan. 14-15. It was a victim of the covid crisis last year.

Said Frank: “We didn’t have it last year, so there’s a lot of kids looking forward to competing there. It’s a high level tournament. We love hosting it. We have teams from all over the map, the City League, double-A, triple-A, talent from all over Allegheny County. It’s a lot of work, but it’s a labor of love.”

There could be as many as 39 teams in this season’s field.

An interesting date on the schedule will be the Sharon Duals, as Fox Chapel will get to see some new faces across the mat.

“We get a mix of teams competing at Sharon,” Frank said. “Dave Ciafre, who used to be at Riverview, is from our area. He’s been friends with my father, Ron, and we usually try to match up with them. It gives us a little bit of a different look than wrestling the same teams over and over again.”

Former head coach Ron Frank is a volunteer assistant who is also on the Fox Chapel Area School Board. John Baxter returns as an assistant Trevor Hartless is also back.