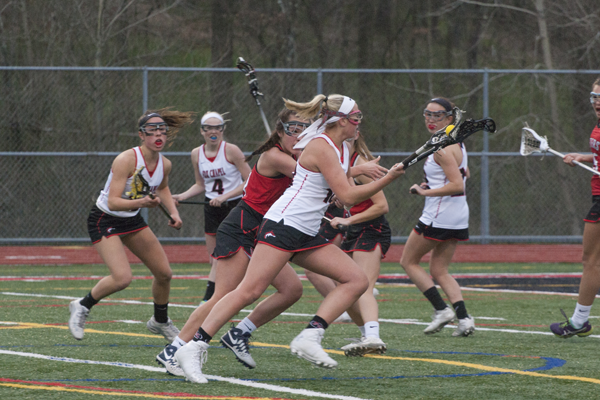 t’s said that the only team happy at the end of a season is the team that wins its final game.

Fox Chapel’s girls lacrosse team doesn’t belong to that category. But the Foxes do have plenty of momentum to build upon heading into the 2018 season.

The Foxes reached the championship game of the WPIAL tournament where they fell to Pine-Richland, 12-11, in an overtime thriller. Despite the loss, Fox Chapel advanced to the PIAA Class 3A tournament. That’s where the Foxes earned a heart-stopping 10-9 overtime victory over District 6 champion State College at Cumberland Valley High School in a driving rainstorm.

One of two qualifiers from the WPIAL, Fox Chapel was the only team from the WPIAL to advance beyond the first round as WPIAL champion Pine-Richland lost to District 3 runner-up Manheim Township, 16-9.

Fox Chapel drew a tough opponent for its PIAA quarterfinal game, Downingtown East, the No. 6 qualifier from District 1. There’s a reason why District 1 qualified seven teams for the 16-team PIAA tournament: that district has the best girls lacrosse teams in the state. One of them, district runner-up Springfield is playing District 12 champion Archbishop Carroll for the PIAA 3A championship at noon today at West Chester High School.

As for Fox Chapel, the season ended with a 19-7 loss to Downingtown East.

As written earlier, the Foxes have plenty of momentum heading into next season.

Two of their top players — freshmen Mary Ellis and Sloan Rost — both return. Ellis defined the term “playmaker” with five assists in a 14-12 victory over Seneca Valley in a WPIAL semifinal victory and another assist in a 12-11 overtime loss to Pine-Richland in the WPIAL championship game.

Rost had two goals and an assist in the victory over Seneca Valley and two more goals in the loss to Pine-Richand. Returning with those two are juniors Margeaux Essey and Kate Goodwin, sophomores Marissa Hardiman, Rebecca Klaas and Makenzie Miller.

Still, there will be some holes to fill. Standouts Megan McCrady, Mikayla D’Cunha and Ali Wessel all have graduated along with Caroline Smith. McCrady scored five goals in each of the games with Seneca Valley and Pine-Richland. She will be playing next season with Georgetown University of the NCAA Division I Big East Conference.