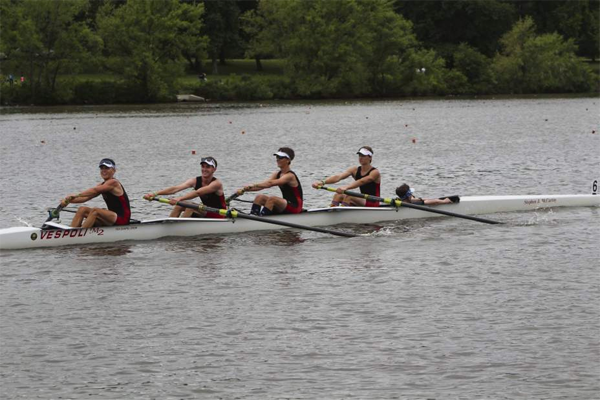 Boys lightweight crews from Fox Chapel and North Allegheny came back a little heavier after earning silver medals in the Scholastic Rowing Association of America Regatta May 26-27 in Camden, N.J.

The Fox Chapel varsity four of seniors Alan McIvor and Tim Marsh and sophomores Connor McAtee and Trevor Klatt, plus sophomore coxswain Matt Good, placed second of 18 teams. They posted a time of 5 minutes, 9.44 seconds in 1,500 meters, about nine seconds behind Rye (N.Y.) (4:58.454).

Fox Chapel coach Mark Bellinger said the Foxes peaked at the right time. They were second in the Midwest championship earlier in the month.

“By all reports, the boys had their best row of the year in the Grand Final,” Bellinger said. “The coaches had spent time the week before the SRRA doing some tweaking of the boat and our approach to the race, but, in the end, it was the swing, the coming together of the minds and bodies, that made this a tremendous achievement.”

McIvor, 18, of O’Hara said earning a silver medal was an amazing accomplishment.

“Going into not only finals, but the weekend of racing in general, we knew that our competition was going to be really fast,” he said. “Any time you can race against the (nation’s) fastest school teams, (that’s) a victory for yourself and your program.”

It was the Foxes second silver medal in two seasons in the regatta. Dylan Lukas and Noah Kasian were runners-up in the men’s open varsity 2x final in 2016.