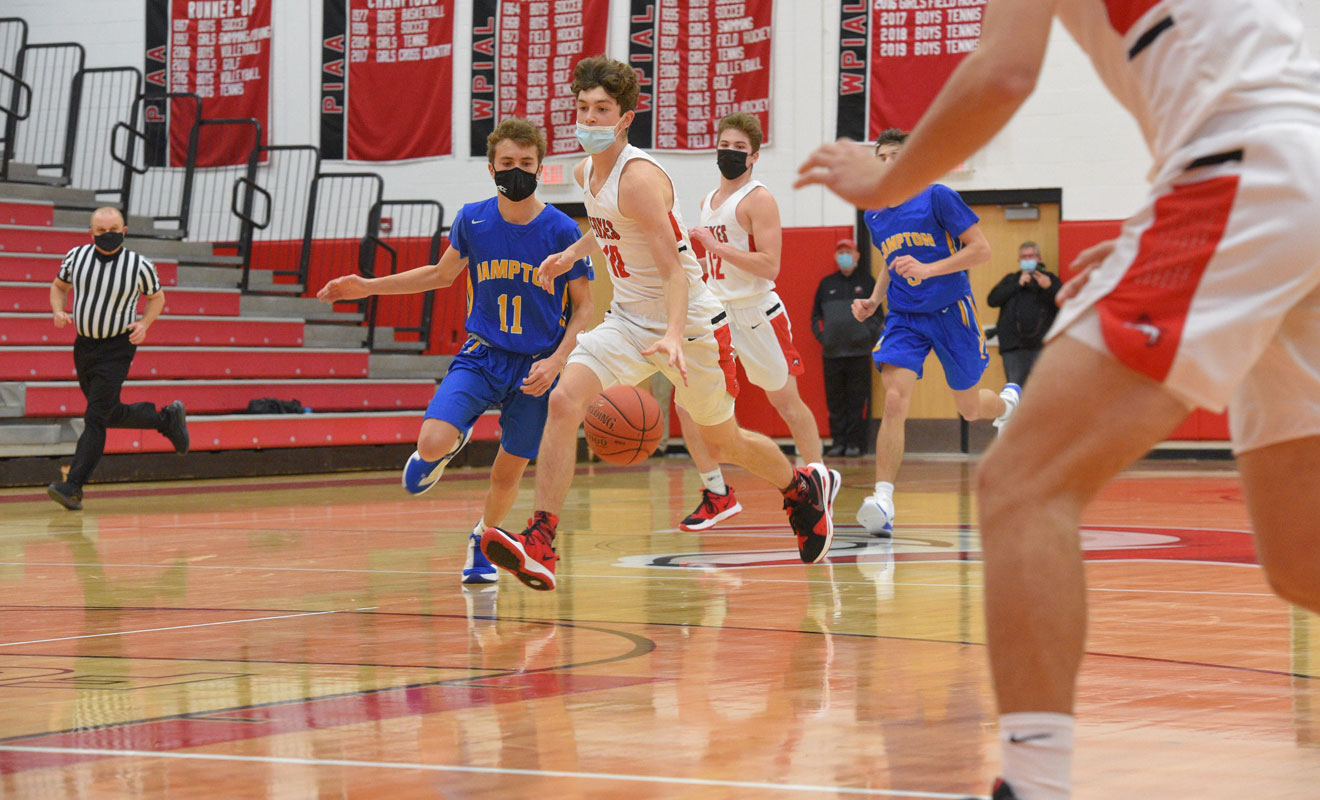 When Andy Swartout checked into the game in the second quarter Tuesday night, he turned into a pool shark.

Repeat over and over again.

Pine-Richland needed a spark, and right on cue, it was a reserve junior guard who helped the Rams stick it to No. 2 Fox Chapel, 76-63, propelling them into the WPIAL final for the fourth time in six seasons after topping the host Foxes in a Class 6A semifinal.

Swartout wears No. 3, especially appropriate Tuesday considering he connected on five 3-pointers and scored a career-high 18 points. All of the 3 balls came from the corners, too, including four in the second quarter to help the Rams turn a 21-19 deficit to a 40-31 halftime lead. He scored 14 points during that stretch. The Rams led the rest of the way to notch their ninth win in the past 10 games.

“I’ll shoot it wherever, but the way Fox Chapel plays, they play that packed defense. They bring it in,” said Swartout, whose previous career high came in the quarterfinals when he scored 15 points against Hempfield.

“We knew about him,” Fox Chapel coach Zach Skrinjar said. “We just didn’t do a good job of helping and getting out on him, which I think was one of the biggest differences in the basketball game.”

But Swartout wasn’t alone when it came to Pine-Richland players with a hot hand. The Rams shot a scorching 61% (31 of 51) from the field in the game. That included a 63% (17 of 27) performance in the opening half. Fellow juniors Joey Dudkowski (22 points) and Andrew Alexander (13 points) also scored in double figures, while yet another junior, Luke Shanahan, added eight points and 15 rebounds.

“We didn’t take any unnecessary shots, which is what I preach all of the time,” first-year Pine-Richland coach Bob Petcash said. “I’m really proud of the guys. We shot the ball well. We stayed within our system. We didn’t try to change anything and we played Pine-Richland basketball.”

Fox Chapel saw its 18-game winning streak end despite an outstanding performance from standout junior guard Eli Yofan, who scored 33 points. He scored 19 of those in the second half, including 14 of his team’s 15 third-quarter points. But unlike Pine-Richland which was balanced offensively, Yofan didn’t get much help from his teammates. No other player reached double figures. The Foxes shot 46% (22 of 48) from the field.

“Everything runs through Eli,” Petcash said. “He’s a really good player. We knew that we needed to be able to manage all four other players and I think we did a really good job of controlling that in their offense. I think that put a lot of pressure on them and we could see it as the game went on”

Added Skrinjar: “I thought that we had opportunities and just didn’t take advantage of them. We’ve been getting balanced scoring and we didn’t get that today.”

Yofan collected 10 consecutive points late in the third quarter to bring Fox Chapel within 48-46, but Swartout answered with his fifth 3-pointer to extend Pine-Richland’s lead back to five after three quarters. A Yofan free throw midway through the fourth trimmed Pine-Richland’s advantage to 57-51. However, the Rams fought back with a 9-2 run to pull away.

Pine-Richland’s “pool player” and his buddies will now try to help the Rams win their third WPIAL title. They won back-to-back titles in 2016 and 2017.

“This is what we’ve been working for since Coach got the job,” Swartout said. “A lot of other schools were in gyms. We were out on the blacktop. We have a really good team in front of us. We’ve been playing those juniors since we were little. They know to play. They’re well coached. Two more days of film. Two more days of practice. And we’ll try to take care of business Friday.”