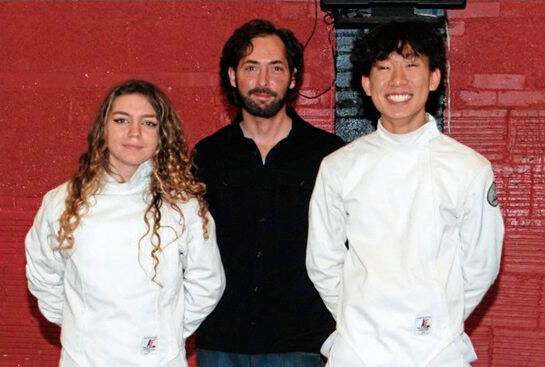 While the coronavirus pandemic knocked out a number of businesses and events, one sports program that survived is the Fox Chapel High School fencing team.

After missing the 2021 season because of pandemic concerns, the boys and girls fencing teams returned to action in 2022.

The boys team won the regular season of the Pittsburgh Interscholastic Fencing Association (PIFA) and lost to Aquinas Academy in the finals at Allderdice High School. The No. 4-seeded girls team won all but one tournament during the regular season, but had a tough draw in No. 1 North Allegheny — but participants were happy to get back to competition.

“Everyone performed well and fenced to the best of our ability,” boys team captain Lawrence Liu said.

“We had two starters who were in their first year. It went down to the final punch (point).”

“I think our success was pretty astounding this year, considering that most of them had just started this year,” said girls team captain Chiara Mincin. “Our first-year starters improved significantly.”

Word of mouth was key to letting people know about the team. Action takes place in a designated area called a “strip.”

“One of my friends introduced me to it in ninth grade, and I started liking it a lot,” said Liu, a junior.

“I was interested in fencing awhile before my freshman year of high school,” Mincin said. “During Club Week, I saw a poster and decided to join. Everyone was really cool and I stayed. It doesn’t really take long for you to train and compete in a match.”

She added when you learn the skills in the first year on instructions “you’re pretty good to go.”

Fencing is a “club” sport, meaning it is financed by players, coaches and community volunteers and not sponsored by a school district. More than a dozen high schools in Western Pennsylvania have fencing teams, but more than 100 schools need to sponsor the sport before it would be recognized by the PIAA.

Getting back into fencing wasn’t easy, however.

Because a number of seniors from the 2020 team graduated and the 2021 season was canceled by USA Fencing, Mincin needed to go out and recruit fencers among her schoolmates.

The effort was a resounding success as 26 student-athletes showed up, forcing Fox Chapel to have a waitlist for the first time.

Another problem was acquiring a coach. Mark Hirsch, who coached the team for a number of years, stepped aside because of covid concerns in his household. He said he plans on returning to coach next season.

In stepped interim coach Brendon Beatty, owner of the Corsair Fencing Club of Etna. Not only did Beatty step in to fill the coaching void, he offered the team free practice time at his facility when the Fox Chapel High School and Dorseyville Middle School gyms weren’t available.

Assistant coach Bill Fisher is also active in the sport. He will be entered into the Holy Grail Tournament on March 19 at Carnegie Mellon. High school, college and adult fencers will be participating, including some Fox Chapel team members.

The future of fencing at Fox Chapel is bright. Liu and will be back as a senior while Mincin, a senior, will be moving on. Hirsch said he plans on returning to coach next season.

“The kids are the key in getting the word out about the sport,” volunteer coach Sara Mincin said.

“Once the kids find out about the sports, it seems to grow in popularity. Social media and the success of the teams this year has opened it us to other kids who didn’t know we had it here.”