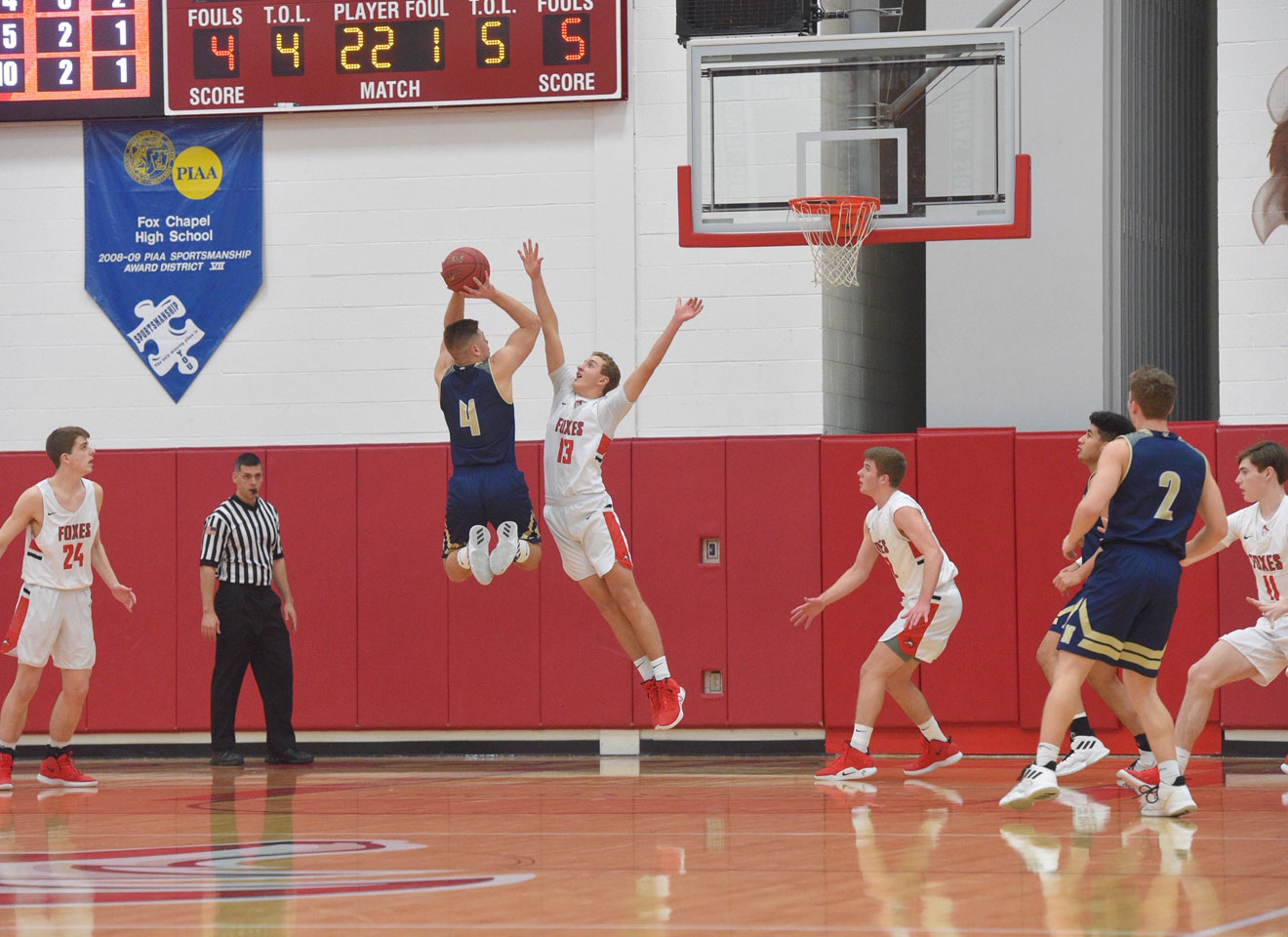 At the end of practice, most teams come together in a circle, put their hands in and say one, two, three and then their team name.

The Fox Chapel boys basketball team puts its own twist on it.

To those who follow the Foxes, it’s not surprising defense is their rallying cry.

It’s been the calling card and main point of emphasis for coach Zach Skrinjar during his tenure. Their goal is to guard every inch of the gym every single night and make life miserable for opponents.

Considering the Foxes have made consecutive appearances in the PIAA playoffs, it’s been a pretty good formula for success.

“Defense is something that you can bring with you every night,” Skrinjar said. “You can have it with you at home and on the road. If you have that DNA to defend, that’s going to travel with you everywhere you go.”

The Foxes return three starters from a team that finished 16-9. They made the WPIAL quarterfinals before losing to eventual Class 6A champion Mt. Lebanon. Fox Chapel lost to eventual state champion Kennedy Catholic in the PIAA first round.

Seniors Arnold Vento and Sam Brown and sophomore Eli Yofan are returning starters, and senior Will Livingston was the team’s sixth man last year. Brown is injured and won’t suit up to begin the season but is expected to return in the early portion of the schedule.

They all have seen the benefits of digging in on defense.

“We see that defense creates the offense,” Vento said. “When we go on runs, it’s usually from steals and tips, and that gets everyone engaged in the game. Even on the bench, guys will start clapping and getting us hyped up.”

Skrinjar said the goal is to hold opponents to 40 or 45 points, but last year if the Foxes held opponents under 60 points it usually meant a win. They were 15-2 when holding teams to 60 or fewer points, and the losses were against Mt. Lebanon and Kennedy Catholic. If the Foxes allowed more than 60 points, they were 1-7.

Part of Fox Chapel’s success aside from defense is a three-pillar approach of things it feels it can control.

“Everyone can hustle, everyone can rebound and everyone can move the ball,” Vento said. “It’s not one thing that someone can do and nobody else can. It’s not a talent thing. It’s heart and hustle.”

The Foxes return a lot of experienced players who came off the bench. Aside from Livingston, sophomores Lorenzo Jenkins and JP Dockey saw playing time as well as junior Kent Baldauf. Shane Susnak returns after being injured last year. Skrinjar expects his team can go eight to 10 players deep.

“Even if it was coming off the bench late in games, everyone had some experience playing varsity basketball last year,” Vento said. “I feel more comfortable with everyone on the floor. Everyone knows what needs to be done and what we expect.”

Fox Chapel opens the season at the North Hills tournament Dec. 6, when it faces Hampton. The Foxes play in Section 3 with Norwin, Latrobe, Hempfield, Connellsville and Penn-Trafford. They finished second in the standings last year behind Latrobe.

Jerin Steele is a freelance writer