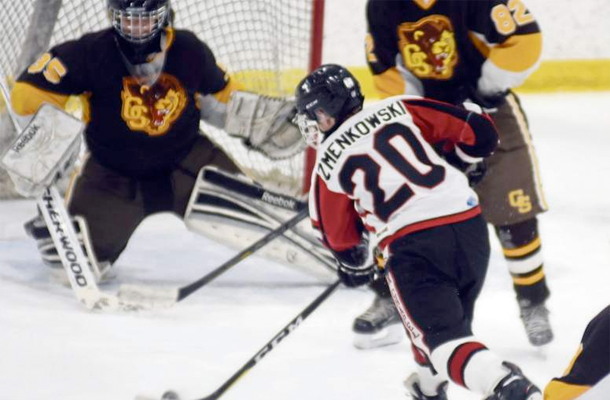 Fox Chapell had its puck-control game working for stretches Monday night, and that has been its recipe for success all season. But the Foxes also had lapses on defense.

And anytime the Foxes had a breakdown or a mistake, Sewickley Academy made them pay.

An opportunistic Sewickley Academy team scored four times off Fox Chapel turnovers to propel the No. 8 Panthers to a 6-4 victory in a PIHL Class A Penguins Cup play-in game at RMU Island Sports Center.

“We definitely took advantage when we had chances, and that’s one thing we talked about this week,” Sewickley Academy coach Chris Chiusano said. “We wanted to make sure we capitalized when we had scoring opportunities, and I think we did that tonight.

“I’m really proud of the guys tonight. We talked about giving a 100 percent every shift, and they followed through on that.”

With the score tied 2-2 after two periods, Sewickley Academy scored a pair of goals a minute apart early in the third, the first coming on a wicked wrist shot that beat Fox Chapel goalie Tyler Radigan. Then the Foxes turned the puck over at center ice with both defensemen caught up ice, and Michael Hajdukiewicz skated in alone and scored to make it 4-2.

After Sam Stites scored on a backhand through a screen to cut the lead to one, the Panthers forecheck forced a turnover at the Fox Chapel blue line. The puck squirted to Andrew Beck, who skated in alone and scored.

Chase Villani scored a power-play goal late in the third that cut the lead to 5-4 with a minute remaining, but Michael Hertzberg sealed it with a goal 30 seconds later.

Sewickley Academy recieved strong goaltending from Cole Luther, who stopped 37 shots. Luther had a Class A-best .912 save percentage in the regular season.

The first goal came on a 3-on-2 break that Beck finished with a wrist shot past Radigan’s blocker. Fox Chapel turned the puck over in its own zone, and it floated out to the blue line to Thoms Yung, who skated in and fired a shot over the glove of Radigan to make it 2-1.

“In time of possession and zone time, I think we had the edge in that one, but when we had momentary lapses, they took advantage of it,” Fox Chapel coach Jason Silver said. “The credit goes to them. They’re a seasoned bunch, and they made the most of their opportunities.”

Fox Chapel prides itself on having a strong cycle game below the face off dots in the offensive zone, and it was there for stretches, but the majority of its goals came off the rush.

The Foxes opened the scoring 11 minutes into the first as a turnover at the blue line sprung Michael Kilmer on a breakaway. Kilmer was tripped by Grant Recker, but from his knees he lifted a shot over Luther.

Late in the second, Villani stick-handled through two defensemen and beat Luther short side to tie it 2-2.

“Our pressure was good and off of that it led to some of those odd-man opportunites,” Silver said. “We made some in-game adjustments when we saw we weren’t really burying our chances with our cycle. We loosened up the system a little bit.”

The Foxes were disappointed with their early playoff exit, but the strides made from a winless season a year ago in Class AA were not lost on Silver.

“I came out of an emotional room — myself included — with us having so much invested in this, but that’s a good group in that room,” Silver said. “The lessons they’ve learned in the past two seasons were invaluable. My whole thing with this is using hockey as a platform for life.

“Hockey teaches things like communication, respect, responsibility, success and failure and how to stomach those swings. If they learned some of those things, then I think this season was a success no matter what.”