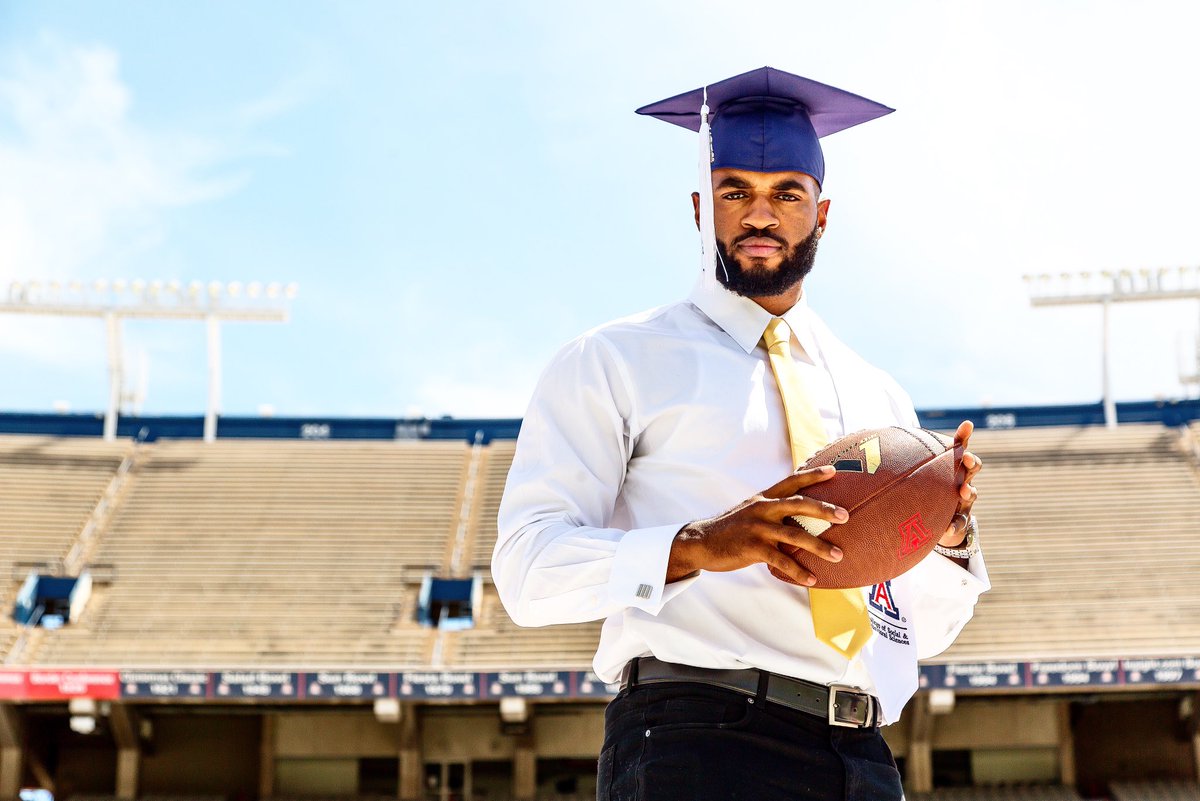 Carrington Vaughn is a graduate of the Law School at the University of Arizona and just earned his JD! But he first started as a preferred walk-on for Arizona Football under RichRod, playing out his initial dream of playing D1 football.

It’s been said there is more to sports than the game, from the back story, the struggle, the lessons learned, the personal growth, and more. That couldn’t be more true than what Carrington Vaughn JD has experienced, learned, and grown from in his life and his eight combined years spent playing football with Arizona Football and attending Law School at the University of Arizona.

As far as football goes, he learned the most under former Defensive Coordinator Marcel Yates as he came in with a chip on his shoulder and without an air-conditioned practice facility back then.

Playing from 2015-18, Carrington proved himself despite having three different linebacker coaches during his time there and even credits his off-field knowledge on the time spent with Arizona.

Lori Burkhart and I, Hosts of the Zona Central Sports Talk show, had the privilege of being able to interview Vaughn recently.

He was recruited by former Arizona Football Head Coach Rich Rodriguez as a preferred walk-on and had to earn his scholarship by proving it after arriving in Tucson. And he did, with flying colors!

Carrington shared with us the experience of how he found out and how his teammates reacted. He also let us in on a few tidbits from behind the scenes during his time with Arizona Football and who he hung out with.

Vaughn told us that he met school President, Robert Robbins, and how much of a mentor he was as he helped Carrington get into Law School at the UofA after he suffered an injury that ended his football career.

But he didn’t allow that to let him down! Much like rising up to earn a scholarship, Vaughn stepped up to complete his primary education, earning a degree.

He started out as a finance major and ended up a law major. And this past year, Vaughn had the opportunity to work as an intern for Granderson Des Rochers, LLP (GDR), which is a full-service entertainment and corporate transactional law firm in Beverly Hills, California.

During this work experience, he worked on matters involving television, motion picture, digital media, fashion, corporate acquisitions, and more. The skills that he acquired during his time with the firm gave him the ability to understand deal-making, and introduced him to the relevant legal risk factors in the entertainment law space.

He wants to help Wildcats understand what their life and career options are after football, as well as give insight into what it means to be an example.

It seems this is a prime time for a former collegiate athlete to be able to help new athletes navigate the business and legal aspects of the NIL, as well as forming corporations and more.

Get all the details yourself in this video interview we had with the former Wildcat football player:

We are so excited for Carrington and will follow along in his journey. He is also excited and feels very positive about the Arizona Football program and the direction that Chuck Cecil in particular and Jedd Fisch are moving forward with. He enjoys being in meetings with the coaching staff with other alumni to help mold the program. Seven years at the UofA and he’s not done making his impact!