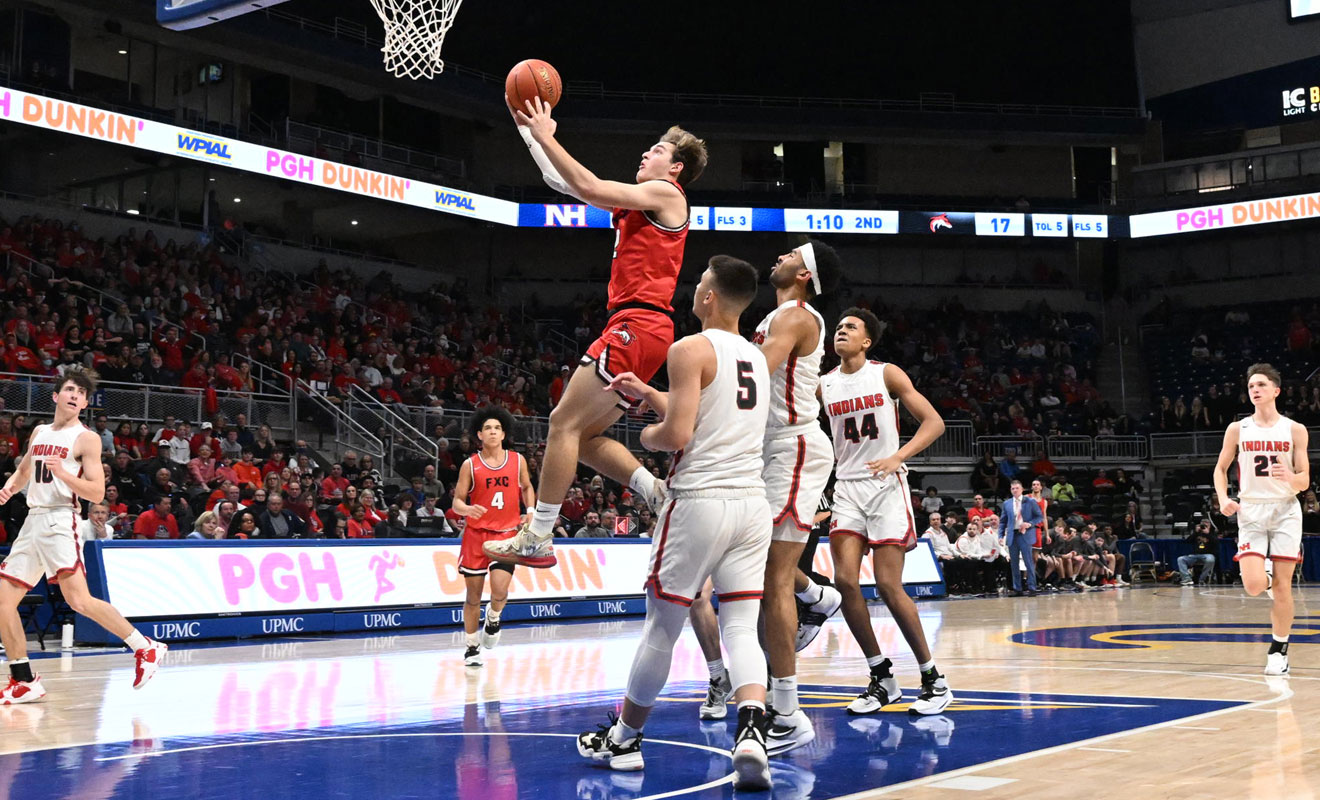 With only one player taller than 6-foot-2, Fox Chapel maybe doesn’t look like a team built to outrebound many opponents.

Too short? Too small?

“The funny thing about Fox Chapel is, I know this not to be true,” Allderdice coach Devin Crummie said, “but other coaches will say … they don’t pass the eye test, whatever the heck that means.”

“Relentless” is how Crummie sees them.

“Because we have some taller, athletic guys, we’re used to being able to out-jump people,” Crummie said. “Obviously, that wasn’t the case today. We harped on it. We just weren’t able to do it.”

Fox Chapel’s Eli Yofan scored a game-high 19 points and led the Foxes with nine rebounds despite an ankle injury that had him wearing a walking boot this week.

Jake DeMotte scored 15 points, and Collin Kwiatkowski had 10 points and eight rebounds. Kwiatkowski, a 6-5 senior, is a newcomer to the team this winter after not playing as a junior. His addition gave the Foxes a player with some much-needed size and muscle in the paint.

He answered the call when Fox Chapel coach Zach Skrinjar challenged his team to get physical in the playoffs.

“Collin has really led the charge on that,” Skrinjar said. “I think that just gets everyone else engaged on the glass. … They all have the ability to do it. It’s just something we preach: keep on the glass.”

The win takes Fox Chapel (26-1) to the state quarterfinals for the first time since 1977. The Foxes will face either Northampton (25-3) or Warwick (21-6) on Wednesday. Snow postponed their second-round game until Sunday.

“A lot of 45-year memories are coming up right about now,” Skrinjar said.

When the Foxes won the WPIAL title last week, it was the team’s first since 1977.

“It would have been nice to get a win for the City,” Crummie said. “We haven’t been past this (round) since Buddy Valinsky’s teams. But if anyone else was going to go, I’d want it to be them.”

Crummie and Skrinjar were high school teammates at Central Catholic.

Fox Chapel answered with a 6-0 run, and Yofan ended the first quarter with a put-back basket to lead 11-10. The Foxes later had two offensive rebounds on a second-quarter basket by Russell Fenton, part of a 7-0 run.

The Foxes ended the first half with an 8-2 run, including six points at the free-throw line to lead 26-21. They went 18 for 21 from the line overall and never trailed in the second half.

Yofan went 8 for 9 from the free-throw line and was perfect on five tries in the fourth. He injured an ankle on a layup in a first-round win and hasn’t practiced since.

“I honestly didn’t know if I was going to be able to play after Wednesday,” he said. “I hurt it pretty bad. It was pretty swollen, black and blue. I haven’t done anything in the past two days. I’ve just been icing continuously and (taking) a bunch of Aleve. … It’s definitely getting better. ”

Yofan started slowly with five first-half points before scoring 14 in the second.

Fox Chapel led 45-40 after three quarters. The Foxes opened the fourth quarter with a 3-pointer by DeMotte and a layup by Kwiatkowski to lead by 10 points.

The Foxes’ lead peaked at 54-40 when DeMotte converted a turnover into a layup with about five minutes left. When Allderdice trimmed the margin to seven, Yofan answered with a three-point play.

“A lot of that is a credit to Fox Chapel’s perseverance, their intensity,” Crummie said. “They’re the most physical team we’ve played by far. Not in a detrimental way. They do it the right way.”

Chris Harlan is a Tribune-Review Staff Writer. You can contact Chris by email at [email protected] or via Twitter .