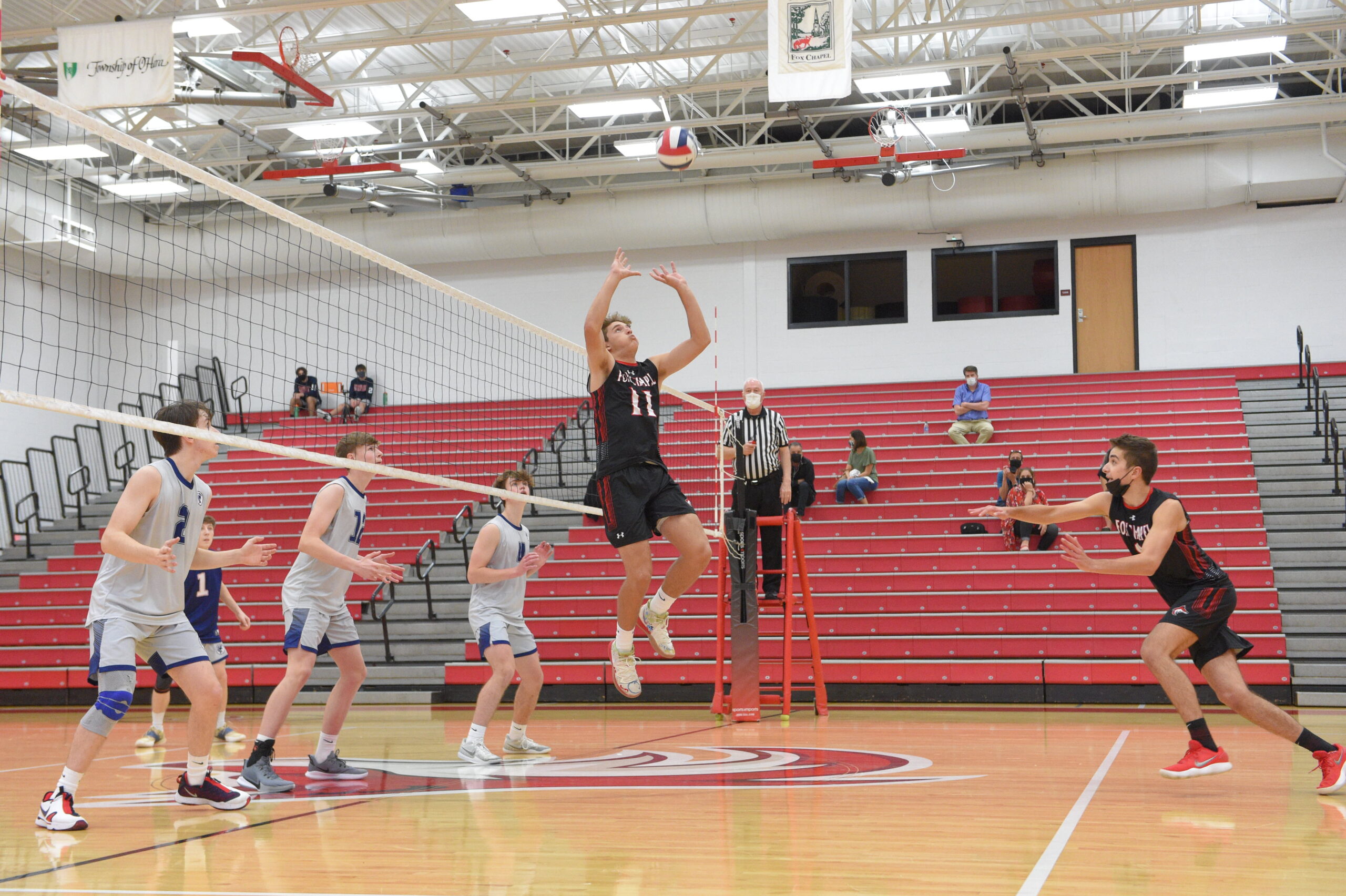 A “fabulous” photo shoot. Then a little media interview, a quick change of uniforms, followed by a walk across the street, a volleyball match — and a win.

That was all in a two-hour stretch one night last week for Eli Yofan. It was just a little more evidence that this is one special WPIAL athlete.

“I think you could throw him in a pool and in about two hours, he’d figure out how to be a pretty good swimmer. That’s just the type of athlete he is,” Fox Chapel volleyball coach Phil O’Keeffe said.

Yofan is a junior at Fox Chapel who is known mostly for his basketball ability. A 6-foot-2 guard, Yofan was selected to the Post-Gazette Fabulous 5 basketball team this season and was the Class 6A player of the year. The photo shoot for the five players on the Fab 5 was last Tuesday. I have helped put together the group shots for the Fab 5 for more than three decades. There have been many memorable stories for the group shots, and you can now add Yofan’s list.

There was the time in 2005 when Mt. Lebanon’s Geoff Kestler left a family vacation in the Caribbean six days early just to come back for the Fab 5 picture. There was the time Hampton’s Ryan Luther, Lincoln Park’s Maverick Rowan, their parents and myself all got stuck on a Post-Gazette elevator going to the photo studio.

And I’ll never forget the time that Aliquippa’s Herb Pope came for the picture and told his coaches at Aliquippa for weeks that he left his uniform at the Post-Gazette and that we lost it. Pope just didn’t want to give back his Aliquippa uniform.

The Yofan story is a pretty good one, too. He was at the photo shoot last Tuesday at North Hills Senior High School. The shoot took about a half-hour, and Yofan and the other four Fab 5 members did a little interview on video afterward. During the interview, the players were asked who was the best all-around athlete in the group? Chartiers Valley’s Brayden Reynolds joked about how many sports Yofan has played. Our Lady of the Sacred Heart’s Dante Spadafora laughed and said Yofan played water polo. Yofan said in passing he was playing volleyball for Fox Chapel.

When the photo shoot ended, I first cleaned up some things and walked across the street to North Hills Middle School to return some basketballs that were used in the picture. A varsity volleyball match was being played between North Hills and Fox Chapel. I walked past the Fox Chapel bench and did a double-take. There was Yofan in a Fox Chapel uniform, cheering on the team.

“I told you I played volleyball,” Yofan said with a laugh from the bench.

But where did he change uniforms? In a phone booth, like Superman used to do? A few minutes later, he was in the match. It turns out, Yofan is one of Fox Chapel’s best players and Fox Chapel won, 3-1.

“I just didn’t expect him to be there that night,” O’Keeffe said.

Yofan is an excellent leaper, which is quite evident in basketball.

“I’ve played volleyball since middle school. Basketball and volleyball complement each other in a way,” Yofan said. “You’re always jumping in volleyball. Jumping is a part of basketball.”

In 41 years of the Fab 5, you’ll be hard-pressed to find many Fab 5 players who were also standout volleyball players.

“I don’t want to sound cocky, but I’ve just grown up with a ball in my hands, and every sport I’ve tried, I’ve been decent at,” Yofan said.

But he is more than basketball and volleyball. He played soccer as a freshman and sophomore, and was all-section. But he gave up that sport last fall and joined Fox Chapel’s golf team. All he did in golf was qualify for the WPIAL individual championships.

“I would just keep the same shorts on and just change shirts,” Yofan said.

O’Keeffe is the one who saw Yofan’s wonderful athletic ability in sixth grade and suggested he try volleyball. O’Keeffe calls Yofan a difference-maker in volleyball.

“He gets to volleyball practices when he can,” O’Keeffe said. “We give him some flexibility. He’s a super nice kid who is great with his teammates. If he was a jerk and was pompous when he showed up, I think the team would reject him. I would say if volleyball was his No. 1 sport, he’d probably be the best player in the WPIAL.”

The Post-Gazette awards a high school athlete of the year every June. Pine-Richland football player-wrestler Cole Spencer is one of the front-runners. But Yofan has thrown his hat into the ring.

Some Division I colleges are interested in Yofan for basketball. He still has a year left at Fox Chapel.

“I know he’s getting recruited Division I for basketball,” O’Keeffe said. “If volleyball was his No. 1 sport, it would be the same thing. You hear about the dwindling multi-sport athletes, but he’s a throwback. I think part of the reason he’s so good at basketball is because he has played so many different sports. If he asks his body to run fast, jump high or do anything like that, his body just says, ‘Yeah, I know how to do that.’

“I’ve had better volleyball players, but in my 19 years at Fox Chapel, he’s the best overall athlete to come out of that school.”