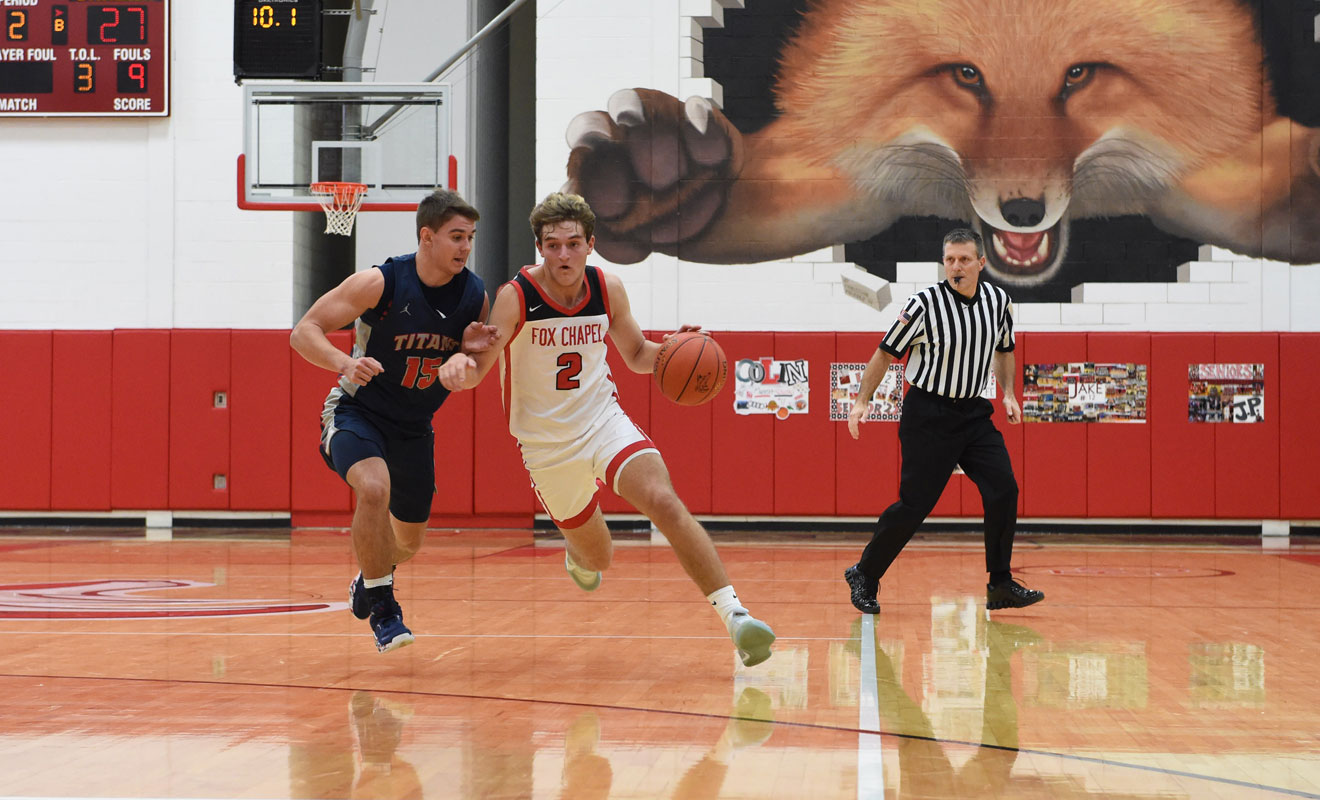 For a player with so many special moments throughout his high school career, Fox Chapel’s Eli Yofan surely knows how to raise the bar when the stakes are high.

Playing on his home court for the final time and with his team trailing by nine at halftime, the star senior guard took matters into his own hands on Friday night. Yofan tied a career high with 34 points to go with 13 rebounds, 3 assists and 3 steals to lead the Foxes (22-1) to a dramatic 77-67 victory against Pine-Richland (12-12) in a highly anticipated WPIAL Class 6A quarterfinal matchup.

“We couldn’t lose in our last home game ever,” Yofan said with a smile.

A returning Post-Gazette Fabulous 5 selection, Yofan is making a strong case to repeat as a member of this year’s team. Any time his team needed a bucket, Yofan was there to deliver but it’s his unselfish nature that his coach, Zach Skrinjar, appreciates most about him.

“His unselfishness and his love for his teammates is the thing that has always shown through for me,” Skrinjar said. “He and all those guys just want to win, and they’re enjoying doing it with their friends.”

With the win, the Foxes earned a trip to the WPIAL semifinals for the second consecutive year. They lost to Pine-Richland in the 2021 Class 6A semifinals, 76-63.

“We’ve grown up playing against those kids, and it’s always been a rivalry,” Dockey said. “It’s always nice to win one of those.”

Although the Rams’ record this season wasn’t overly impressive, most observers believed this would be a hotly contested game, especially with Dudkowski back in the lineup for Pine-Richland after missing time before the playoffs with an injury. That assumption turned out to be true, as the teams raced up and down the court in a frenetic first quarter that saw the Rams jump out to a 23-17 lead.

The second quarter was more of the same, with Pine-Richland catching fire from beyond the arc and Yofan doing everything he could to keep Fox Chapel in the game. Going into halftime, the Rams had a 41-32 lead — a similar score to last year’s WPIAL semifinal matchup, as Yofan remembers it.

“I think it was 40-31 at the half [last year],” Yofan said. “We hated that feeling we had at the end of the game last year, and we didn’t want that to happen again. Same team, same place — we weren’t going to lose twice in two years. We stuck to our game plan and did what we needed to do.”

This time around, the Foxes came out of the break with a purpose and began making their run, as Dockey tied it up at 46-46 with a fastbreak layup. Josh Gimbel answered with a corner 3 to put Pine-Richland back on top, but Fox Chapel finished out the quarter on a 7-0 run — capped by a buzzer-beating 3-pointer by Yofan — to take a 53-49 lead into the fourth.

“I kept telling [Yofan], ‘Go get the ball,’ because they had no answer for him,” Dockey said. “Him being on the court, even when he’s not scoring, his presence helps everyone out.”

With all the momentum squarely in the Foxes’ favor, they made sure not to allow the Rams back into the game, as back-to-back buckets by Dockey gave Fox Chapel a 57-51 lead. Later in the quarter, Yofan converted a layup while drawing an intentional foul, then made both free throws for a 4-point play to make it a 73-60 lead. From there, the Foxes cruised back to the WPIAL semifinals, where they’ll face No. 3 seed Central Catholic (18-5) for the third time this year.

“It looks like we’re going to have Central Catholic again, so it’s going to be a good one,” Yofan said.