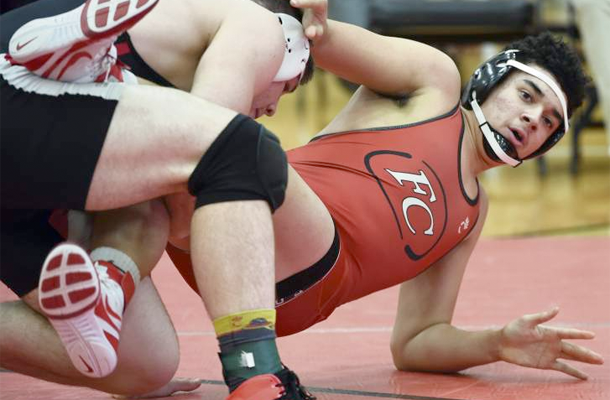 For Fox Chapel sophomore Donovan Cutchember, the Allegheny County Wrestling Tournament did not end how he planned, with a win in the finals.

But Cutchember said he will use the experience of wrestling before a large crowd in the finals as a learning tool.

Cutchember was pinned in the 220-pound final by Upper St. Clair junior Jake Slinger in the second period.

He was one of three Fox Chapel wrestlers to earn medals at the 17th annual event hosted at the high school Saturday.

“I just wrestled a bad match,” Cutchember said. “I’ll take second place, but I know I can do better. I have to learn to relax and be myself in big matches.”

Cutchember said he felt nervous in the finals.

The other Fox Chapel wrestlers to earn medals were Alex Wecht, eighth place at 145, and Zach Carcy, fourth at 182.

“We thought it was a possibility that Donovan could make the finals,” Fox Chapel coach Ron Frank said. “He has great hips and has a good upper body. He likes the throws.”

Frank was pleased how the tournament went because they want to host a great tournament, and it prepares his wrestlers for upcoming individual tournaments.

“We have a young team, so this competition is good for them,” Frank said. “We taped every match, and it will be on YouTube for them to see it. It helps us prepare for practices.”