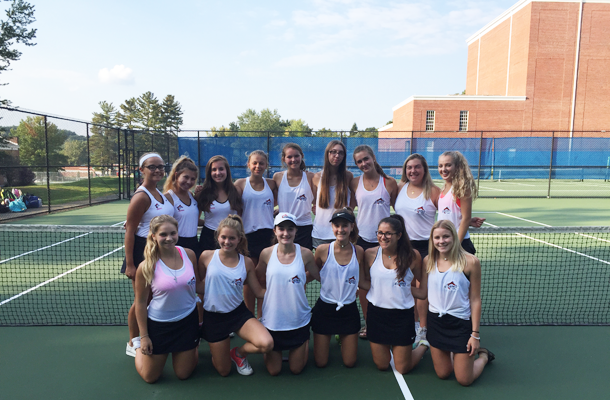 The team is now 16-1 winning its non-section match against Sewickley Academy.

Capturing the section championship again was largely due to the strength of the singles line up. Senior Amanda Nord, sophomore Charlotte James, and junior Kristen Friday combined for a regular season record of 43-2. Kristen is undefeated.

“These players are just doing a lot of things right and will find a way to win every time during all of the big matches,” says coach Alex Slezak.

The Foxes’ two doubles teams also will be counted on as the postseason gets underway. The duos are senior Molly Wiese and freshman Emily Fera, and sophomore Amanda Schilcher with freshman Molly Dean.

Coach Slezak has always maintained that he has no secret formula for sporting such successful teams year-after-year, other than expecting his players to have a championship mindset every day.

“We just happen to have good players and a nice peer group of girls who work hard all year long,” he says. “Once the girls come together for the season they are committed to the team and not just individually. That’s a big part of their success. When it comes time for the playoffs, I tell them the same thing every year: the regular things you’ve been doing all season are good enough. It’s not different in the playoffs. It might be a bigger match, but you need to approach them with the same mindset.”