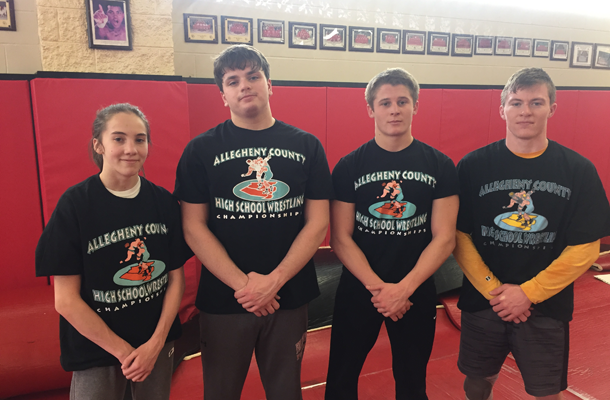 “Once again, we had a field of incredibly talented wrestlers,” says Foxes’ wrestling coach Ron Frank, one of the tournament’s original founders. “There were many hard- fought victories over the weekend and it will be great to see how each of those competitors progress throughout the rest of the season.”

Among those medaling for the home team and earning All-County recognition were junior Ed Farrell (220 lbs.), who finished fourth, and senior sixth-place winner Avery Bursick (145 lbs).

Senior Jordana Matamoros (106 lbs.) pinned her opponent in her final match to earn seventh place. By doing so, she became the first female in the history of the championships to get All-County honors.

“That’s a great showing for them,” says Coach Frank. “We hope to see all of our team members improve as we move into the second half of the season and the individual tournaments.”

Coach Frank adds, “The importance of our championships was very evident to the visiting wrestlers, and how well we pull all those loose ends together, regardless of circumstances, is a credit to our support network of families, staff, and sponsors.”

Due to the inclement weather forecast, and to ensure the safety of all involved, tournament organizers, staff, district administration, and volunteers had to rearrange the two-day schedule and end the tournament earlier than usual. Even so, every single competition still took place in an orderly fashion.

The success of the annual tournament and how well it is run every year, prompted a parent from first-time team tournament champion Thomas Jefferson High School to tell Coach Frank, “We go to many tournaments each year. Everything and everybody works so well together here.”