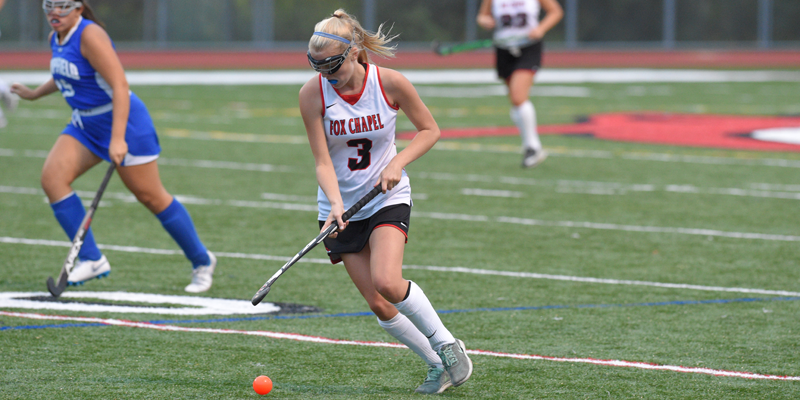 Ironically, when new head field hockey coach Emily Humiston was the age of the players she’s now instructing, she was a star player for rival North Allegheny High School competing against the Foxes. In fact, she was so good that she earned a scholarship to play for NCAA Division I Providence College in Rhode Island. Additionally, she still holds North Allegheny’s title as its all-time leading scorer.

Now on the Foxes’ sidelines for the second year – she was an assistant last season – Coach Humiston says she clearly recalls those days when she was a high school all-state honoree and twice earned all-WPIAL honors, as well as being a member of the Tigers’ 2010 team that captured the WPIAL championship.

“I remember Fox Chapel Area as being a cohesive unit,” says Coach Humiston, who has the distinction of being Providence’s first female student athlete of the month. “There weren’t a lot of weak spots on the team for an opponent to take advantage of. Trying to get through them from the forward line all the way to the defensive line was always a challenge and that’s what made playing Fox Chapel Area so fun and exciting.”

Coach Humiston, an avid mountain climber, admits they are coming off of a season filled with challenges. But her success in achieving new heights, both on the field and off, and her prior knowledge of the players’ and team’s assets, will certainly be of benefit as she sets her own goals for the team.

“Last year was tough for everyone because expectations were so high, as they should be,” she says. “But we had graduated a large and very skilled senior class the year before and they won the section championship. With so many of our experienced players gone, and trying to break in new players, we failed to repeat the title.”

Coach Humiston, whose day job is in digital marketing and also coaches for the club field hockey team Pittsburgh Venom, isn’t deterred by the task at hand. In fact, one of her strengths as a coach is identifying players’ unlocked potential and then working with them to achieve lofty aspirations.

“We have had some very, very talented players on the team whose skills were well above what the average high school player possesses,” she says. “But you can’t win with just a few players performing at that level. So what I’ve been attempting to do is get every player’s skills closer to those of the best players on the team.”

As part of her overall objectives, she’s also encouraged her players to participate in the high school’s summer strength and conditioning program.

“One thing I’ve told the players is that even if we aren’t the most skilled team, we sure as heck are going to be the fastest and strongest,” says Coach Humiston. “I believe that what matters the most are the decisions you make when you’re tired. That’s when someone’s true character shows. It’s under those conditions that you see how disciplined they are and what really motivates them to keep going.”

“I think my own biggest strengths as a coach are my ability to form relationships and pass on my passion for the game,” says Coach Humiston, the former head coach for Oakland Catholic before she accepted the position with the Foxes. “I really love field hockey and I want everyone who I’m coaching to feel the same way. Like every other coach, I want to win WPIALs, but at the end of the season, I also want everyone to walk off the field and be able to say that we improved in some way and identify how we did it.”

She continues, “This might sound cliché, but it’s going to take every player having the passion and desire to want to be section champs again and make it to the WPIAL playoffs.”

Along that line of thinking, she decided the team needed a motto for the year and came up with the word “unless.”

“It’s actually from ‘The Lorax’ by Dr. Seuss,” Coach Humiston explains. “The quote from the book is ‘Unless someone like you cares a whole awful lot, nothing is going to get better.’ For us, it means if we want to get the team back to where it used to be, every player needs to care enough about this program and each other.”

One thing is for sure: this coach certainly has the desire, enthusiasm, and passion to push the program forward. And that’s exactly what she intends to do.