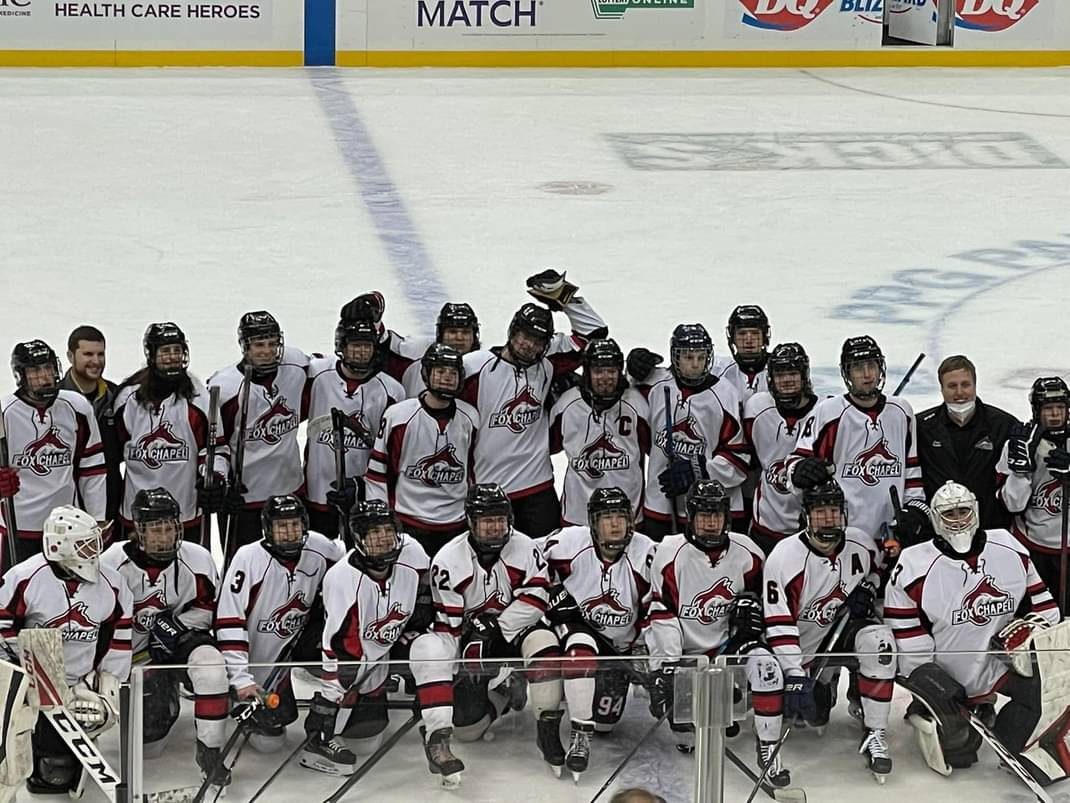 Fox Chapel hockey is coming closer to capping its amazing comeback season with an undefeated mark.

The Foxes are 15-0 with five games left in the PIHL regular season. That’s a far cry from winning only four games last year.

Through it all, Fox Chapel has done most of the damage on the road, winning nine of the 15 away from home ice – Harmar’s Alpha Complex.

The Foxes will play four of their final five regular season games at home. Fox Chapel clinched the Class A Northeast Division title several weeks ago.

The formula for all the winning has been simple: playing together as a team.

The philosophy hasn’t changed throughout the lengthy regular season.

“Them playing as a family and them buying into everything, wanting to reach that goal has been the No. 1 factor of where we are.”

As far as finishing the regular season unblemished, reaching that goal also represents an age-old philosophy: one game at a time.

“We’re taking things one game at a time,” Raidna said. “Every practice and on the way forward, our record is 0-0. You can’t get too far ahead of ourselves. You’ve got to keep that level head. Hockey is a roller coaster of emotions, not too high, not too low.”

The late comebacks have been against quality opponents.

Said Raidna: “North Hills and Quaker Valley are two that have stuck out to me, Moon as well. Three great hockey teams. Guys in the locker room, it’s very rare to see a group of high school kids unfazed by being down by a goal. They show that coming out to the third period. They’re not afraid go out and attack and earn a W.”

While keeping the lines intact most of the way, Raidna said he hasn’t hesitated to adjust, especially in third periods.

Fox Chapel has outscored the opposition 91-24.

Goaltender Nash Wedner has stopped 323 shots in 347 attempts for a save percentage of .931.

Any team with the amount of success as Fox Chapel’s earned often has unsung heroes. With the Foxes, it’s senior Gavin Gebhart.

“Gavin’s been a four-year varsity player and he’s done nothing but given us a 120% every time he’s out on the ice,” Raidna said.

“He’s an all-around great kid. He’s the type of kid you want in your locker room who has all his teammates’ back no matter what. His energy and his passion for the game is something that our team needs and something that he gives, and it’s been fantastic to see him grow into that.”

The PIHL will have its Penguins Cup tournament in early March. Fox Chapel is likely to get the top seed among eight playoff teams – the four first-place teams plus the four others with the best records.

Despite some great teams in the past, Fox Chapel has never won a Penguins Cup title.

Fox Chapel (15-0) has five games left in the regular season: