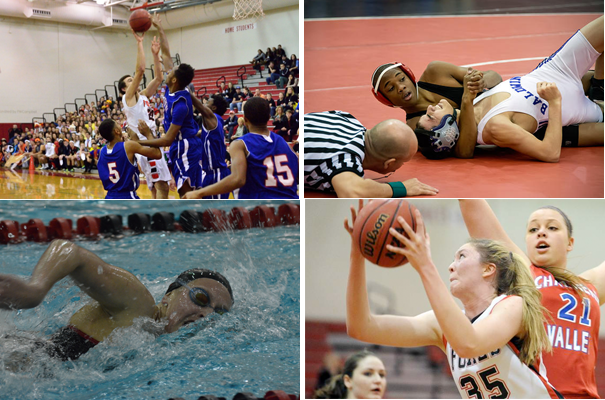 Many of the Fox Chapel Area High School winter teams faced challenges incurred by circumstances beyond their control, yet the athletes persisted, showed remarkable resiliency, and some teams even reached unanticipated and exciting levels of success. Their efforts demonstrate the power of positive thinking, a strong work ethic, and the admirable resilience of our student athletes.

After a slow start, the boys staged a remarkable rally, had a seven-game winning streak, and qualified for the WPIAL and the PIAA playoffs. They were considered underdogs in the WPIAL playoffs with a 12th place seed, but the determination and strong will of this Cinderella team propelled them to win two of their playoff games, including upsets of the fourth and fifth seeded teams. Their efforts resulted in the 2015 WPIAL semifinalist title. Coach Zach Skrinjar credits his team’s chemistry, defense, rebounding, and hard work for the turnaround and successful season. The coaching staff will continue to emphasize those areas as they enter the off-season and then again next year. Six seniors will be greatly missed for their many contributions: forwards David Brown, Jack Lundy, and Erik Ovick and guards Josh Dunlap, Bruce Ling, and Billy Urso. Jack was selected to play in the Cager Classic tournament and will be joined by Billy Urso, who also was named to the Roundball Classic team. Three starters will return next season and give the team a solid base to build upon.

Injuries plagued the team all season and by the time the last game concluded, six players were sidelined. It was adversity that new head coach Jennifer O’Shea could have done without, yet she kept the young team positive, and in turn they showed great resilience. Despite the injuries, the hard-working squad won the Moon Christmas Tournament and all but one of their season losses were to WPIAL playoff teams. Coach O’Shea was pleased with their improvements, especially their rebounding skills and breaking presses. At times, a number of freshmen were on the floor at the same time, giving them valuable experience that should pay off next season. Junior Kayla Slovenec, the team’s leading scorer this year, was named All-Section first team. Kayla also was selected to play on the Seneca Valley Tip-Off Tournament team. Sophomore Gabby Badway was sidelined with an injury for some of the season, but still earned All-Section second team honors, and senior Vanessa Blazer was named to the Cager Classic team. In addition to Kayla and Gabby, next year Coach O’Shea expects big contributions from current junior Taylor Cohen and current sophomore Bryanna Urso (who both will return after season-ending ACL injuries), and juniors Anna Kelly and Sarah Supsura. There are also high expectations for the freshmen and sophomores to continue to improve and become instrumental in the team’s efforts.

The girls’ gymnastics team continued to be strong on the vault, with eight girls qualifying for the WPIAL championship: seniors Missy Eschmann, Krissy Mountz, and Sophie Roe; sophomores Sara Hamilton, Christina Massalski, Taylor Thiele, and Dixon Veltri; and freshman Ellie Mountz. Sophie earned sixth place at the WPIAL championship on the uneven bars and Christina took fifth place on the balance beam. The team ended the season on a high note by earning their highest score of the year. They will need to work hard next season to fill the void left by seniors Missy and Sophie, who competed on floor, bars, beam, and vault, and Krissy, whose events were floor, bars, and beam.

This season was a challenge for the Foxes’ swimmers and divers as they adjusted to 5:30 a.m. off-campus practices on school days while construction continued on the new pool complex. They persevered and ended up sending 11 girls and seven boys to the WPIAL championship and three to the PIAA championship. Coach Erin Bruni has nine girls and five boys returning next season to anchor each team and is optimistic and excited, especially because they will be able to use their brand new state-of-the-art pool!

An enthusiastic and close-knit girls’ team enjoyed solid depth this season, which greatly contributed to their winning record and earning the section co-champions title. At the WPIAL championship, senior Franny Dean broke her own school record she set last year in the 100 breast stroke (1:08.113) with a time of 1:06.67, and advanced to the PIAA championship. It was the third year Franny advanced to the WPIAL and PIAA meets.

The boys’ team had a small, but very talented group of swimmers this season, including senior Noah Cagley, who broke school records in the 200-and 500-meter freestyle events. In the 200, he beat his own prior record time of 1:44.64 with a 1:41.14 finish, and in the 500 he broke a record set by another swimmer in 2009 (4:41.03) with a time of 1:44.64. Noah advanced to the WPIAL and PIAA championships and at one point in the season, even had a “WPIAL sweep,” meaning he qualified in every event. Most swimmers have an off event, so Noah’s accomplishments were quite impressive. Noah finished his outstanding high school swimming career holding five school records.

Coach Vernon Yenick’s industrious divers had a great season with all divers increasing their scores by at least 30 points from last year. Senior Miranda Simon had a stellar season. She earned the bronze medal at the WPIAL championship and her third consecutive trip to the PIAA championship. In addition, she not only broke a 21-year school record for all females divers by more than 25 points, she went on to beat her own record twice more, and did it all within just five weeks. Fellow senior John Zottola also had a great year and won nearly all of his duel meets. Dixon Veltri narrowly missed the WPIAL finals, but she is only a sophomore and has the potential and work ethic to make the championship meet next season. With Dixon’s return and some promising upcoming freshmen joining the team next season, Coach Yenick is very optimistic about the future of the Foxes’ diving program.

A committed, balanced team advanced to the second round of the WPIAL team championships. Earlier in the season, the squad won the Buckeye, Ohio tournament and the Sharon Duals tournament and finished as the runner-up at the Hampton Dual meet. Class AAA Section 3 champion senior Ian Moritz (132) and fellow senior Section 3 runner-up Darnell Foster (heavyweight); junior Derrin Dietz (170); sophomore Michael Mahon (182); and freshman at Zach Carcy (195) all clinched spots in the WPIAL individual championship tournament. In addition, longtime head coach Ron Frank earned his 380th career win this season, ranking him fifth on the all-time WPIAL coaches list. He record is tied with the late Gus DeAugustino, the legendary coach from North Allegheny High School. In addition to Ian and Darnell, the team will lose five other seniors to graduation — Aidan Carlier, Dan Cupps, Jon Fisher, Tyler Heasley, and Matt Silverman — all of whom made valuable contributions. However, 12 out of 14 starters will return and bring experience to a team that already showed much improvement throughout the year.