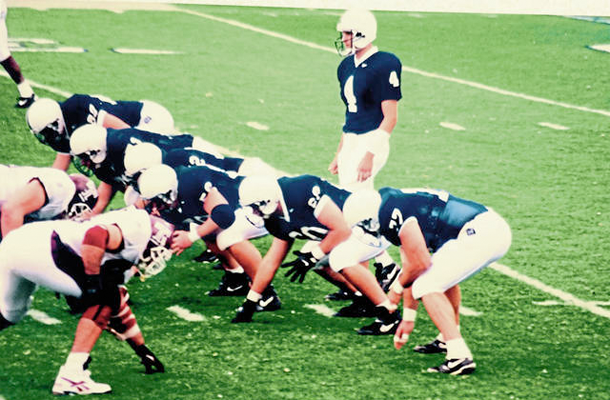 This is the first in a series of profiles on the 2019 Fox Chapel Sports Hall of Fame inductees. The banquet is June 8 at The Harmar House. For more information, contact Jim Perry at [email protected]

He was a three-time all-conference player in football and made the all-section team in basketball.

In his junior year of football, he made third-team AP all-state and was selected to the first team in his senior year. He was also a McDonald’s honorable-mention All-American in basketball in 1993.

“There were like a thousand or more kids that got honorable mention, so that wasn’t a real big deal,” he said.

He has many memories of his sports career at Fox Chapel.

“I got to play in the Big 33 game in 1994. We got crushed by the Ohio team,” he said. “They had Orlando Pace and Curtis Enis, among other future college and NFL stars.

“I remember playing highly ranked North Allegheny at Newman Stadium in 1993. We had 32 players on our whole team, not even enough to field a JV team. Most of us had to play both ways. NA had about 100 guys dress for the game, including Parade and USA Today All-American Ryan Fagan. On that day, we knocked them out of playoff contention. Fagan became my college roommate and is still one of my closest friends. To this day, I am not above reminding him about that game.”

“I also remember us finishing with a 6-4 record in our first-ever season in Quad-A in 1992. In basketball, I remember beating Plum, 75-14, in 1994 and also making the state basketball playoffs in 1991. I talk regularly with some of my teammates from junior high and high school: Ken Scholtz, Chad DiNunzio, Charley Hudak, Steve Carvelli and Mike Hanlin. I also keep in touch with coach Ken Oleksa and athletic trainer John Panos.”

Ostrosky went to Penn State, where he majored in business logistics and got his master’s degree. He was a freshman on the 1994 team that finished second in the country. He played QB in the 1996 Outback Bowl win against Auburn and played tight end in the 1997 Fiesta Bowl win over Texas. He was a four-year class captain and a 1997 letterman.

“It was an incredible four years there,” Ostrosky said. “We went to a major bowl game every year, and I left with a lot of great PSU football memories and experiences.”

As far as participating in sports nowadays, Ostrosky enjoys running.

“Mostly, I’m a fan for my kids with their football, basketball, baseball and gymnastics teams,” he said.

He lives in the Lake Norman area near Charlotte, N.C., with his wife, Amy, and their children, Ainsley and Luke.

“It was a humbling experience being selected for the FC Sports Hall of Fame,” Ostrosky said. “My brother, Dave, is already in for basketball, and I think my sister, Beth, would be in there if she had played basketball her senior year. We should have a nice contingency of Ostroskys at the reception.”